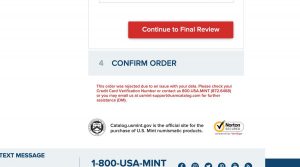 The U.S. Mint attempts to fix their online ordering system, but to what effect?

This past week, the U.S. Mint held a press availability for the numismatic media. I highlighted the meeting after the discussion, which includes corrections. While the U.S. Mint appears to be working to rectify its e-commerce issues, there continue to be unaddressed problems.

A few weeks ago, I wrote that it was my impression “that the lawyers had more say over policy than the appointed director or the career executives.” It is not clear that the U.S. Mint has separated its policy decision from the advice of counsel.

Missing from the discussion is how the lawyers forced the U.S. Mint to violate the law. Even though they identified the Internet Robots (BOTs), the lawyers not allowing the U.S. Mint to resolve the problem puts the e-commerce system in violation of the Federal Information Security Management Act (FISMA). FISMA was passed in 2002 to require the government to protect computing resources.

Although it sounds like a technical issue, FISMA’s purpose is to allow bureaus like the U.S. Mint to protect public access to government resources. It also allows the government to do what is necessary to serve the public.

While the dealer community is part of the public, they are not the majority of the interested public. The U.S. Mint reported that only 18 authorized purchasers could access 10% of production at a 5% premium as part of its early access program.

The U.S. Mint deserves commendation for its ability to exceed production during the pandemic. Questions remain on the decisions on collector coin programs.

OTTAWA, ON, Aug. 20, 2021 /CNW/ – The Royal Canadian Mint (the "Mint") is pleased to announce its financial results for the second quarter of 2021 that provide insight into our activities, the markets influencing our businesses and our expectations for the next 12 months.

Hundreds of ancient coins looted from archaeological sites were found in a house in Bnei Brak, the Antiquities Authority (IAA) announced Monday. The artifacts were uncovered during an operation by the IAA’s Robbery Prevention Unit.

Generally speaking, gold is the antithesis of fiat currencies and is viewed as a hedge against inflation.

→ Read more at swfinstitute.org
Gun money and the Irish war for England’s throne

There are few things more alluring than buried treasure — preferably ancient and preferably gold. Historically, people tended to bury their coinage in times of trouble, intending to come back for it.