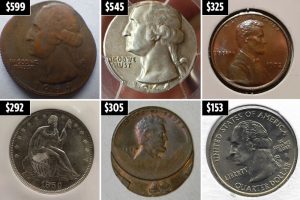 The Sun is searching eBay for interesting coins and hyping the prices as part of their U.S. Edition (Image courtesy of The U.S. Sun)

While perusing the news across the Internet, I noticed that The Sun, the British tabloid with a mix of interesting news and other cultural stories, has launched a version for the United States. The Sun also has an assignment editor responsible for hyping sales U.S. coins on eBay.

In the U.K. version of The Sun, someone watches eBay auctions and writes about whatever sells for more than face value. There are many stories about the extraordinary prices for the sale of 50 pence circulating commemoratives, error coins, and some demonetized the Royal Mint issues.

Now that The Sun is publishing for the United States market, an editor is watching eBay for the sale of U.S. coins. Although most of the stories have been about error coins, they have picked up on higher prices of classic coins. Almost all of their stories have been about what appears to be well-preserved ungraded coins. These are the type of coins that someone might find in a relative’s draw.

Freedivers in Spain notified the authorities after finding a handful of gold coins dating to the fall of the Western Roman Empire (Image credit: Xàbia City Council; University of Alicante )

→ Read more at livescience.com
There is a case to introduce a R10 coin in South Africa: Reserve Bank

Research commissioned by the South African Reserve Bank (SARB) shows that there is an economic case for introducing a R10 coin in South Africa – however, there are concerns about uptake from the public, says Pradeep Maharaj, the central bank’s chief operating officer.

FacebookTwitterWhatsAppEmailPrintFriendly A commemorative $1 coin issued by the Royal Canadian Mint marks the 125th anniversary of the discovery of gold in the Klondike region of Yukon.

The story of how a poor Irish migrant from Donegal became the face of American’s ten-dollar gold coin has been made into a documentary. Mary Cunningham, a native of Carrick, was working in a restaurant in New Hampshire when she caught the eye of the famous sculptor Augustus Saint-Gaudens.

→ Read more at irishcentral.com
BSP seeks law vs coin hoarding after seizure of P50-M worth of loose change in QC

MANILA – The Bangko Sentral ng Pilipinas (BSP) on Sunday called for a law against hoarding of extremely large volume of coins after some P50 million worth of loose change were found in Quezon City last week.