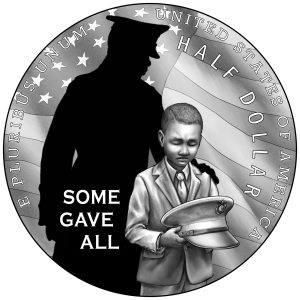 I am looking forward to the National Purple Heart Hall of Honor commemorative. Of the designs introduced, it will be interesting to see the implementation of the half-dollar reverse. As a line-art drawing, it can capture the feeling of the impact of the effect of a soldier earning the Purple Heart. It triggers memories of my grandfather, who earned his Purple Heart on the battlefield in Italy during World War I.

The biggest news of the week is the U.S. Mint saying they will continue the Morgan and Peace dollar programs in 2022. Based on the email I received, collectors seem to be excited about the future of this program. I am still looking for a Peace dollar in its original government package. If anyone is selling, contact me, and let’s make a deal.

Under the news radar was the sale of the Hawaii Five-0 1913 Liberty Head Nickel. The coin once owned by COL E.H.R. Green featured on an episode of the original Hawaii Five-0 television series, sold for the 14th time. Stack’s Bowers brokered the coins, graded PF the 64+ by NGC, sold for $4 million in a private sale.

Although it is fair to ask, was this news under the radar, or has the sale of coins breaking the $10 million barrier making a mere $4 million sale seem pedestrian?

An unnamed treasure hunter discovered the majority of the coins and gold objects between 2014 and 2020. British Museum

After acquiring more than 2,800 rare Islamic silver coins earlier this year, Louvre Abu Dhabi is preparing to unveil the objects as part of a two-year project. Photo: DCT Abu Dhabi

→ Read more at thenationalnews.com
How Did a 15th-Century Coin Minted Under Henry VII End Up in Newfoundland?

Minted in Canterbury between 1493 and 1499, the silver half groat dates to the middle of Henry VII's reign, when a rebellion led by pretender Perkin Warbeck threatened to unseat the nascent Tudor dynasty.

→ Read more at smithsonianmag.com
Key set of dollar coins sells for $3,045 – do you have one of the pieces?

RARE coins can sell online for a pretty penny, especially full collections. A set of 13 Morgan Silver Dollar coins sold for more than $3,000 earlier this month.