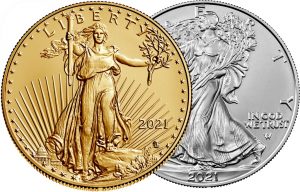 It is the time of year for retrospectives, looking back on the good and bad of the past year. But there is still time left in the year, and there is still news to cover.

Breaking late in the week, a Royal Proclamation passed to create a 50 pence coin to celebrate the 100th Anniversary of the British Broadcasting Company. The BBC was founded and made its first broadcast in 1922 on the recommendation of the General Post Office, which had problems managing broadcast licenses.

Gold has been hovering between $1760 and $1810 for the last two months. Although the gold spot price is close to the $1900 that some have predicted for the year-end price of gold, the $28 prediction of silver will fall short.

Silver has been on a steady fall since hitting $30 in February. Earlier in the year, the pandemic caused the closing of mines and processing facilities. The advancement of COVID-19 vaccines allows facilities to ramp up processing, and the increased supply allows prices to fall.

There are two weeks left in 2021 and time for more news.

Tracing history through coins at Aloyseum

If you like seeing ancient coins and understanding history through the coins, then Aloyseum, a museum at St Aloysius College in Mangaluru, is the place for you. Nearly 1,328 coins from 82 countries are on display.

→ Read more at deccanherald.com
The heroes removed from Philippine banknotes, coins throughout the years

MANILA, Philippines – The decision of the Bangko Sentral ng Pilipinas (BSP) to exclude World War II heroes from the new P1,000 polymer banknotes met outrage from Filipinos.  Descendants of Josefa Llanes Escoda, Vicente Lim, and Jose Abad Santos urged the BSP to keep the martyrs’ portraits and place the Philippine eagle – or other plants and animals the central bank wants to feature – on the other side of the bill.