A Token of Radio City 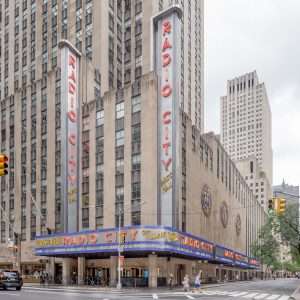 Continuing my collecting through rediscovering my past, I came across an aluminum medal for Radio City Music Hall.

My first visit to Radio City and Rockefeller Center was in 1968 during the winter break from school. My (late) mother, who grew up on Coney Island, understood that New Yorkers did not take the time to see the sights in their own city. To make up for the time she lost as a child to see New York, she took her children to play tourist during school breaks.

The trip to Manhattan was to see Saint Patrick’s Cathedral, Rockefeller Center, including the ice rink, and then see a movie at Radio City. I do not remember the movie we saw, but my mother later told me that they showed three short movies, and it cost 25-cents for my brother and me (that’s $2 accounting for inflation).

Before going to the movie, we toured the main stage where the famous Rockettes performed. As part of the tour, we saw the Rockettes practice and visited with a few on stage. I remember being amazed at how long their legs were — which is not bad for an eight-year-old!

Many years later, I worked for NBC and visited Radio City often. When NBC was involved in a live production in Radio City, I used my connections within NBC Sports to watch the rehearsals from the production trucks. Before the final rehearsal, I was allowed into Radio City to see the performance. Later, I returned to my office on the 16th floor, two floors above David Letterman’s offices.

The aluminum medal is 40 mm in diameter. On the front is an image of Radio City and the reverse has a view of the main theater looking at the stage. It is a well-executed image that uses the unique design of the theater to give the image depth.

While taking another look at the medal, it reminds me of a Mardi Gras token.

As I keep finding these great collectibles, I have to develop a better way to store them. My current system cannot handle my recent expansion, especially when the tokens and medals are different sizes. I will report what I come up with.