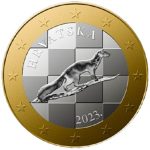 This week’s entertaining news comes from Croatia, where their proposed euro coins have been under attack for misappropriation and plagiarism.

Croatia is getting ready by updating its minting processes to produce euro coins. The process includes a nationwide contest to create new designs for the side of the euro coins they can customize. 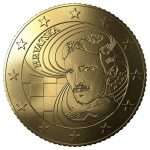 First, the Croats upset Serbia by selecting Nikola Tesla to feature on the 50-cent coin. Tesla, the inventor of alternating current (AC) electricity transmission, is ethnically a Serb buried in Belgrade, Serbia. Throughout his life, Tesla identified himself as Serbian. However, he was born in 1856 in the village of Smiljan, which is part of Croatia today. Serbia does not believe that Tesla should be on a Croatian coin. Croatia disagrees, and the design will stay.

This past week, Croatia introduced the design of the 1 euro coin featuring an image of a Pine Marten that may have been copied from a photograph. The marten is a weasel-like animal that lives in many northern climates, including the two species that live in North America. Its prevalence in Croatia led to its selection during the design competition.

However, it appears that the marten image is a “copy” of a photograph by Scottish photographer Iain H. Leach. Leach was told about the design by others who claimed plagiarism. One user on Twitter posted a video comparing the two images by overlapping the designs.

Play the following clip and you decide.

It is the same. Hope you got credit or gave a licence. pic.twitter.com/2VVx9jVChO

If the artist copied Leach’s photograph, the design would violate his copyright. The Croatian National Bank decided to not use the design.

Six treasure finds dating from the Bronze Age to post-medieval periods were declared treasure on Friday by John Gittins coroner for North Wales east and central. The objects were all discovered by metal detectorists and include a Bronze Age hoard, three medieval coin groups, a post-medieval bodkin and seal matrix.

→ Read more at wrexham.com
OPINION: Why we should discontinue the penny

It is time to retire the penny from circulation. All of them. In this expensive modern age we no longer have a need for something as worthless as a penny. They are expensive to mint, a waste of time for everyone using them, bad at being money and get less valuable every single year. I hope by the end of this column you will be, at the very least, sympathetic to the idea of letting the penny go and relinquishing it to history books and coin collections.

→ Read more at uiargonaut.com
Coins made during King Edward VIII's short reign are now worth £200,000

The extremely rare Edward VIII penny was never even officially released (Image: Showpiece.com/PA Wire) A rare coin marking the reign of King Edward VIII has been valued at a whopping £200,000.

The euro has not even been introduced in Croatia yet, but the single currency is already causing the second scandal.