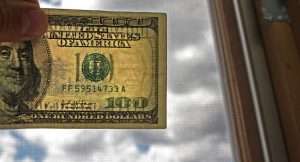 Bleaching low currency denominations and printing higher denominations is not a new phenomenon. This past week a New Jersey man was convicted again for doing it again.

Hollis Forteau, 38, of New Jersey, was convicted on two counts of counterfeiting in 2015 for bleaching low denomination notes, printing $100 on the blank paper, and passing them as real currency. Since most people continue to use iodine pens to detect counterfeit currency, the counterfeit notes will pass the test.

Professional counterfeiters know it is easy to pass bleached currency. Rather than understanding the embedded security features of real currency, stores continue to rely on technology that the criminals know how to defeat.

The consumers end up paying for these cases.

Businesses should be encouraged to train their employees to recognize the anticounterfeiting embedded into United States currency by the Bureau of Engraving and Printing.

The Central Bank of Argentina has ceased minting new coins, according to media reports. Rising metals prices have made the coins too costly to produce.

A New Jersey man was sentenced to five years in prison after creating counterfeit money with bleach, $1 bills and a printer, officials said. Fake $100’s were made.

The rare gold coin has been on display at the British Museum on long-term loan from a private collector.

The Ukraine crisis has shaken up prices—and sent some Americans scrambling for coins.

→ Read more at theatlantic.com
The saints on the coins

Do you know that Sheikh Noor ud Din and Sheikh Humza Makhdoom have also been mentioned in the numismatic records of this land?