For the next week, the theme of National Coin Week is Dynamic Designs, Artistic Masterpieces celebrating the designs on coins. I cannot think of any numismatic topic that will lead to a more heated discussion than coin designs. Whether it is about the design selected for a quarter, commemorative coin, or classic versus modern designs, coin designs can be a polarizing topic. Even the topic of colorization has caused some to have a visceral reaction.

This week, I will be celebrating coin designs. During the week, I will celebrate coin designs from my collection, and they will be designs that I find appealing and the reason why I like them.

Today I start with the newest design that has piqued the interest of collectors and potential new collectors, the Maya Angelou Quarter. Angelou appears on the first issue of the American Woman Quarters program, a four-year program celebrating the contributions and accomplishments of women in United States History. 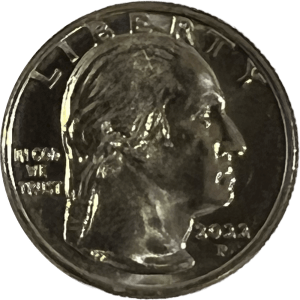 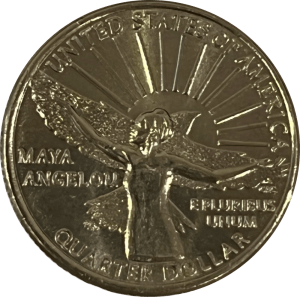 Maya Angelou’s appearance on the quarter also marks the first time an African-American woman has appeared on a U.S. coin. Her first famous book, “I Know Why the Caged Bird Sings,” inspired the design. It is the first time the general public has talked about a U.S. coin since the beginning of the 50 State Quarters program.

The obverse features a portrait of George Washington designed by Laura Gardin Fraser in 1932. When the U.S. Mint moved to change the quarter’s design to honor the bicentennial of George Washington’s birthday. A competition was held for the design. Fraser’s design was selected by the Commission of Fine Arts (CFA) as the best representation of Washington for the coin. Unfortunately, Treasury Secretary Andrew Mellon, a known misogynist, rejected Fraser’s design and selected the art of John Flannigan instead.

The 1999 George Washington $5 gold commemorative coin featured Laura Gardin Fraser’s design. The American Women on Quarters program will feature her design. To sum up the impact of the design, the following is from the 1932 letter from the CFA to Secretary Mellon:

This bust is regarded by artists who have studied it as the most authentic likeness of Washington. Such was the skill of the artist in making this life-mask that it embodies those high qualities of the man’s character which have given him a place among the great of the world…Simplicity, directness, and nobility characterize it. The design has style and elegance…The Commission believes that this design would present to the people of this country the Washington whom they revere.

Romans Suffered From Financial Crisis During 86-91 BC, Analysis Of Ancient Coins Reveals

→ Read more at news.abplive.com
I’m a coin expert and found an error piece in a quarter roll – and so can you

FINDING valuable coins may not be too difficult – and an expert has revealed a way to do this. Should a coin be in a high grade or have a low reported mintage, the piece could be quite valuable.