What about eliminating the $1 Federal Reserve Note 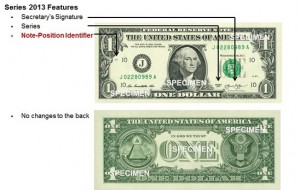 For most of the 21st century, many groups have advocated for eliminating the $1 bill, while others provide a counterpoint to maintain the status quo. While the discussion of eliminating the note has economic and policy concerns that lawmakers must address, how would the U.S. government implement the policy?

Neither entity can make this decision alone. On July 14, 1969, history teaches us that the Treasury Department and the Federal Reserve announced they would discontinue issuing $500 and higher notes “immediately due to lack of use.” Even though the Bureau of Engraving and Printing last printed these notes in 1945, the Nixon Administration felt that removing them from circulation would help reduce crime. The Federal Reserve withdrew the notes as customers deposited them in banks.

The agreement was not as easy as the history books want us to believe. In 1969, William McChesney “Bill” Martin was the Federal Reserve Chair. Martin was appointed by Harry S. Truman in 1951, fiercely guarded the Federal Reserve’s independence, and was known to push back against presidential policies with a minimalist approach to managing market factors. In the 1960s, Martin ran afoul of Lyndon Johnson and Richard Nixon for not doing more to help prevent a recession.

Following a meeting with Nixon in October 1969 about what his administration saw as an impending recession, Nixon announced that he would replace Martin when the Federal Reserve chair’s term expired on January 31, 1970.

Before the formation of the Federal Reserve, the Treasury Department determined what currency to print and its design. Treasury Secretary Franklin MacVeagh proposed reducing the size of the currency paper in 1909. After years of study and discussion, Secretary Andrew Mellon approved new smaller designs issued in 1929. The change did not require new legislation.

Yellen can refuse by saying that she is following her boss’s policies, the President of the United States. But the Federal Reserve is an independent agency and does not have to ask for permission. By law, if the Federal Reserve does not order the printing of new $1 bills, the Bureau of Engraving and Printing will not print new currency.

Politics may prevent Yellen and Powell from making this decision, but they can do it and allow the United States to join the rest of the civilized world that no longer carries its unit currency in paper form.