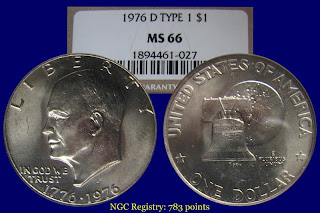 It has been a while since I have showed off a new purchase and I wanted to show off my 1976 Type 1 Eisenhower Dollar graded MS66 by NCG. While some may not think this exciting, it is a very good looking coin that helps boost the score of my registry set collection.

For those new to reading this blog, I wrote about Competitive Collecting which is collecting high grade coins and attempting to complete Registry Sets by the major third party grading services. Those competing in the registry set competitions, try to collect the highest grade coins. Those coins are assigned points and those with the most points wins each year.

I started by dabbling in registry set collecting at the end of 2006. I became more serious in 2007. By the end of 2007, I decided that if I was going to compete, I wanted to win. Since I have an interest in bicentennial numismatics, I decided to clean out the sets I am no longer interested in collecting and just collect 1976 registry coins.

When I found that this coin was available, I looked up the registry set value and found that removing the previous coin and adding this one would raise my point total by 616 points. Even more important, it would propel me to third place for the 1776-1976 Clad Mint Set competition. I could not resist buying the coin.

After adding the coin to my registry set, I found that the signature banner produced by NGC has added “An NGC Top Ranking Set” to the bottom of the banner for having the third ranked set. This is so cool and such a great ego boost, I downloaded the current banner so I can have a copy.

How cool is that!