When Harrison won the Whig Party nomination for president, Harrison and his running mate, John Tyler adopted the campaign slogan, Tippecanoe and Tyler too to promote Harrison’s military record and reputation as a battle hero.

Harrison was inaugurated on very cold and wet day in Washington on March 4, 1841, without wearing an overcoat or hat in order to continue to show his toughness. His inaugural speech was the longest in American history, lasting nearly two hours. And this was the short version of the speech after it was edited by Daniel Webster for length.

President Harrison became ill with a cold on March 26 presumably as a result from the inauguration. The illness progressed to pneumonia, pleurisy and other symptoms not understood by the doctors of the period. Harrison died on April 4, 1841, after 32 days in office.

Harrison’s presidency and death was as historic as it was a test of the Constitution. Harrison was the oldest elected president at 68 until the election of Ronald Reagan in 1980. As the first president elected from the Whig Party, his two hour inaugural speech is the longest of any president and his term of 32 days is the shortest in United States history. Harrison was the only president to never appoint a federal judge.

Harrison was the first president to die in office. While we understand the rules of succession today, Harrison’s death caused a constitutional crisis in the young nation. The debate surrounded the interpretation of Article II of the Constitution:

The vague wording caused a debate as to wether Vice President Tyler would take the oath of office as President or would he become an “acting president.” After debate in congress and by the cabinet, Chief Justice Roger Taney was consulted. Chief Justice Taney said that he thought the constitution meant for Tyler to take the oath of office as president. Based on Taney’s opinion, Tyler was given the oath on April 6, 1841.

As a historical note, Chief Justice Taney was presiding when the Supreme Court ruled on the infamous Dred Scott v. Sanford case in 1857. 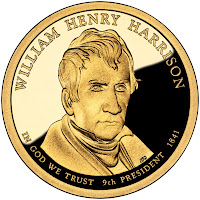 On February 16, the US Mint used 2009 President’s Day to pre-release the Harrison Dollar Coin to an audience in Charles City, Virginia. The coin officially goes into circulation on February 19. The reverse was designed and engraved by Mint Sculptor-Engraver Joseph Menna.

As Harrison was the cause of a number of firsts, the coin honoring his short presidency is the first of the Presidential Dollars to feature the motto In G-D We Trust on the obverse rather than the rim as mandated by law.

Image of William Henry Harrison from the White House website.
Image of the Harrison Dollar obverse courtesy of the US Mint.