Mongolia’s Coin of the Year 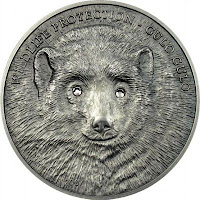 There was a lot written on other sites about the of the Coin of the Year award going to Mongolia. The award was presented at the World Money Fair this month in Berlin. 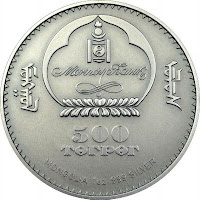 I was curious about the coin and searched for an image. The coin is a 2007 silver 500-tugrik (33-cents US) coin depicting a wolverine. A unique feature is that the eyes are made of diamonds. Even with the limits of the online images, I can understand why David Harper, editor of World Coin News, said, “The judges had to be drawn to the eyes of the wolverine. They are quite compelling.”

This coin was also the winner of the best silver coin in this year’s competition.

While the US Mint produces some nice coins, I wish they were given the opportunity to do something different with non-circulating collectible coins. There was only one bi-metalic commemorative coin and no coins that used elements other than engraving to enhance the coins. I am not suggesting that the US Mint produces colorized coins like the Royal Canadian Mint, but the use of diamonds for eyes on the Mongolian coin was a brilliant idea. I hope the Mint learns from this for the future.

Image courtesy of the Wolverine Foundation.