Getting A Round Tuit In Baltimore

If it was Saturday at the end of March, it was time to drive to Baltimore for the Whitman Baltimore Coin and Currency Expo. This show is a three-times-a-year ritual for the numismatic community centrally located on the eastern seaboard. For the last few years, the show has expanded to three large halls in the Baltimore Convention Center and made into a real numismatic happening by the people at Whitman. Whitman has done a good with the show and I hope their new venture into Philadelphia is successful. If there is one complaint, I wish they would use chairs without arms. Those of us with wide bottoms would appreciate this.

After completing errands, I left home at 11:30 and drove to Baltimore. Depending on traffic, the trip from home to parking near the Baltimore Convention Center can take an hour. I park near the convention center in the parking lot at the Sheraton Inner Harbor. I overpaid for parking and walked to the Convention Center.

Registration booths are expertly tended to by members of the Baltimore Coin Club. Sine many of the members are also members of the Maryland State Numismatic Association, it was nice to see friendly faces.

Once inside I started with my regulars. I wanted to talk with them to see how the show was going. The responses were mixed, but in the extremes. Some dealers said that they would not make the money they paid in fees and expenses for the weekend. Others said that the weekend could not be better.

There was a lot of gold. Gold was everywhere. Some dealers were advertising that they would buy scrap gold. I watched as a dealer bought scrap gold at spot less 5-percent. I also saw a dealer with one ounce gold eagles fanned across his case when I entered the hall and the pile was half the size two hours later.

At the show I met Sharon, a dealer from New York who travels with her husband nearly every weekend to shows. She was a fun person who convinced me to buy something I originally was not going to buy. Sharon mostly sells currency and said that the show was a disaster for her. Although she had some very nice National Banknotes, there seemed to be little interest in currency at this show. Sharon and her husband will be at the Dulles Coin & Currency Expo at the end of April. This year is the third annual show at Dulles. I will have to drop by.

Other currency dealers also said it was slow. I do not collect currency because of the costs involved, but I will browse their tables to look at the artwork of these wonderful notes. Currency dealers also love to talk about their products and I have learned a lot about economic history from their discussion of the notes. Nearly every currency dealer said that their sales were slow. Only one dealer gave me a shrug and said that it was “OK.” 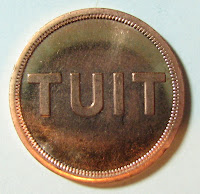 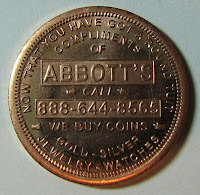 Although I did not buy much, I continued my tradition to try to find something I consider “neat.” This show’s neat find did not cost anything. I was walking down the aisle and walked by the table for Abbott’s Coins. I forgot to ask who the dealer at the table was, he was not John Abbott, but he was handing out these copper-looking tokens. Looking at the token, there were the big letters “TUIT” on the front. I looked at the dealer and said, “I can’t take this. It means that I would have to get things done!” But it was so compelling, I had to take one.

The June show will be bigger and will have a Sunday session. There will be speakers, club meetings, and more activities. It will be a real happening along with the usually buying and selling. If you are in the area, you have to attend this show. When you are done, remember that the Inner Harbor is right next door with shops and plenty of restaurants. If you want to bring your family and they are not interested in coins, send them to the National Aquarium while you check out the coins.