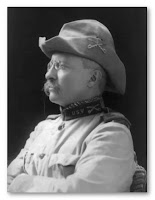 Although Theodore Roosevelt was born of wealth, he was a man of the people. Rather than becoming someone of society, Roosevelt sought to change society. From his days as an asthmatic child using hunting and other physical activities to overcome his weaknesses, his education at Harvard, conquering the Badlands of South Dakota, to a political career that changed nearly every level of government, Roosevelt was the renaissance of American history.

Before Roosevelt was 42, he was a deputy sheriff in the Dakota Territory, Police Commissioner of New York City, U.S. Civil Service Commissioner, Assistant Secretary of the Navy, and Colonel of the Rough Riders for which he was awarded the Medal of Honor. Roosevelt was elected to the New York State Assembly, Governor of New York, and Vice President of the United State. In fact, his nomination as vice president to run with William McKinley by the Republican Party was to get him out of New York because he was reforming the status quo out of existence. 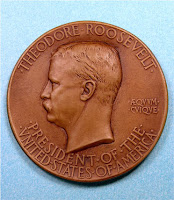 On September 14, 1901, at 42 years and 322 days of age, Roosevelt became the youngest President when McKinley was assassinated (Kennedy is the youngest elected president when he was inaugurated at 43 years, 236 days). As president he was a trust buster, conservationist, and his slogan of “Speak softly and carry a big stick” set the tone for military and foreign policy that even impacts today’s policies. Roosevelt was the first U.S. citizen and sitting to win the Nobel Peace Price for negotiating the 1905 peace treaty ending the Russo-Japanese War.

Roosevelt initiated the “Golden Age of American Coin Design.” Using his bully pulpit, he held the designs of the U.S. Mint Chief Engraver Charles E. Barber in contempt and ordered coinage whose designs were more than 25 years old to be redesigned. Roosevelt was a fan of sculptor Augustus Saint-Gaudens and asked him to help redesign American coinage.

After Saint-Gaudens died of cancer, Roosevelt continued to look to revitalize U.S. coinage. He seized upon Abraham Lincoln’s 100th birthday to redesign the small cent. He was steered to Victor David Brenner, whose bust of Lincoln was used as the model for the new Lincoln Cent first issued in 1909. Not only was Lincoln the first president to appear on a circulating coin, but Brenner’s obverse is still in use today.

For all his accomplishments, it is difficult to understand why our 26th President has not been honored on a coin.

Theodore Roosevelt was born on October 27, 1858, 152 years ago today. Happy Birthday, Mr. President! We numismatist thank you for your “pet crime!”