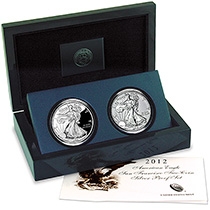 Sales of the 2012 American Eagle San Francisco Two-Coin Silver Proof Set began last Thursday. The two one-ounce silver proof coins with the “S” mintmark will be packaged in a blue lacquer case similar to the one used for the 25th Anniversary Set and will ship in July. Unlike the 25th Anniversary Set that had a production limit of 100,000 units, the San Francisco Silver Proof Set will be struck to demand based on the sales through July 5, 2012.

As part of the catalog page, the U.S. Mint is providing a running total of the units ordered that is updated at 3:00 P.M. during the work week. As of Friday, June 8, the total sales are 85,341.

Sales of the San Francisco two-coin set is slower than the 25th Anniversary set that sold out of all 100,000 sets in five hours. However, a key difference between the two sets is that the 25th Anniversary set had a limited run while the San Francisco set will be struck to order making the ordering process feel less than urgent. Although I have not ordered, I will order before July 5.

I am not sure how many sets I will buy since it will not be an investment like the 25th Anniversary set. The 25th anniversary set was $300 per set and I purchases the maximum five sets. I sold four sets at $600 each. Now, the sets are selling for around $850 each. This is typical of the law of supply and demand: when the supply is low but the demand is high, the price will rise. If the U.S. Mint is producing these sets to the demand, the aftermarket demand curve will not be as high and not bring in the same types of returns. This does not make buying more than one of these sets attractive.

I will buy a set and keep it with the 20th and 25th anniversary sets. I still love the American Silver Eagle coins and look forward to adding these to my collection!

Image Courtesy of the U.S. Mint.