Numismatics at an Auto Show

My dream car… in model form!

You never know when a hobby would intersect with an interest. Of course the hobby is numismatics. The interest is cars. Not just any cars, but classic cars. I have a weak spot for the muscle cars of the early 1970s and just about any car built before 1960. In fact, my dream car is a red 1959 Cadillac Eldorado Biarritz Convertible. I cannot think of any car that screams American over-the-top solid engineering and styling of Harley Earle than of that 5,000 pound beast. General Motors sold the car for $7,400 in 1959 which would be $58,845.77 in 2012 dollars. Even though the Series 62 may be a little less expensive on the current classic car market, when you are looking at cars out of your price range why not go for the top of the line!

Saturday was the 2012 Rockville Antique and Classic Car Show, a yearly show supported by 25 local and regional car clubs. When I arrived around 1 o’clock I saw a field with more than 500 antique and classic cars. Although I was not interested in some cars, there were others that were absolutely stunning. While I did not find a 1959 Cadillac, there were a few cars that I would love to own. You can see some of the cars I found and a quick video of the inside of a Volkswagen Bus visit on my page at Photobucket.†

While the 1959 Cadillac is my dream car, my nostalgic car is a 1973 Plymouth Gold Duster. While it was not my first car, it ranks one of my favorites from my early days. This Gold Duster was “sunshine yellow” with the brown snake-skin three-quarter covered vinyl top. The 225 Hemi Slant 6 engine output 145 horsepower but was more than enough for this car especially since it did not have air conditioning! My father bought it as a new car in 1973 and I “inherited” it in 1980 while in college. Unfortunately, it met its demise on a rainy road while trying to avoid hitting a dog.

To satisfy my nostalgia, I was looking at the wares of the flea market dealers in the adjacent lot when I came across a brochure for the 1973 Gold Duster. “Get Ready to Stake Your Claim” screams the headline on the front cover. Open the brochure and it tells you that “You’ve Discovered Gold Duster.” While admiring the picture that reminded me of my youth, I noticed the coin image at the bottom right corner that said:

If you cannot read the image, it says:

BLAKE & COMPANY $20.00 GOLD PIECEThis gold coin is a replica of the fame Twenty Dollar California Gold Piece, struck in about 1855, that bought sustenance during the days of the great Gold Rush.This is a replica of only two known specimens. The originals are so rare no value has been established.Notice the very fine detail and workmanship. The press embossed on the coin is a good representation of what a coin press looked like in the 1800’s. The milling around the edge of the coin was done to prevent shaving the coin—thereby decreasing its value. The original coins were .900 pure gold.You can make a complete collection of famous United States coins by consulting the back page of this booklet.

Interested in what this collection can be, I turned over the brochure see a 1973 advertisement for 12 “authentic replicas” of the Chrysler-Plymouth “Old West” Coin Collection. The collection appears to be replicas of various assay tokens from the famous gold assayers of the time. For $7.75 per set (or $40.39 today), you could have ordered a full set along with a vinyl/velour folder. 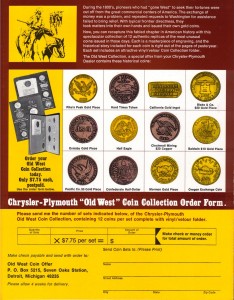 At the intersection of cars and numismatics I found fascinating piece of automotive advertising history with a numismatic slant. I do not know if a version of this set has survived—an Internet search yielded more copies of the brochure—but it would be interesting to find a set.

† At the time this is posted, I have not labeled the images on Photobucket. I hope to finish that sometime this week.