A Small Find From France 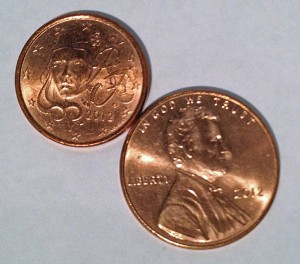 A 2012 one Euro cent pocket change find from France next to a 2012 Lincoln cent.

Somewhere in my travels I received a 2012 one Euro cent coin from France. It is interesting how this coin made it into change here in the United States unless someone was really not paying attention since the Euro cent coin is smaller than our Lincoln cent. Although both are copper coated, our Lincoln cent is 19.05 mm (.75 inches) in diameter while the standard Euro cent is 16.25 mm (.639 inches). The Lincoln cent is also heavier at 2.5 grams made of copper-plated zinc with 2.5-percent being copper. The Euro cent is copper-plated steel weighing in at 2.27 grams where 5.65-percent is copper.

After doing an online search, I found that this is a 2012 coin from France.

As with all Euro coins, the reverse or common side depicts the same common Euro cent design that every country in the European Union uses and has used since Euro coins and currency were issued in 2002. 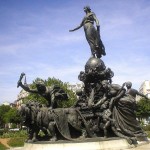 On the reverse, or national side, the coin features Marianne, the national emblem of France and an allegorical figure of Liberty and Reason. Marianne symbolizes “Le Triomphe de la République” (Triumph of the Republic), a bronze sculpture that overlooks the Place de la Nation in Paris. Marianne embodies the desire for a sound and lasting Europe.

To the right of Marianne are the letters “R” and “F” for the République Française (French Republic). The design is surrounded by 12 stars symbolizing the the 12 nations in the European Union at the time of the design. It was designed by Fabienne Courtiade, an engraver from Monnaie de Paris (Paris Mint) whose name appears as “F COURTIADE” between the fourth and fifth star (assuming clock-like positions). This design is used on France’s one, two, and five Euro cent coins—all copper-plated steel coins.

If nothing else, I am a little ahead of the game since the coin is worth 1.3-cents at the current exchange rate. I hope you had a good Thanksgiving.

Image of the statue “The Triumph of the Republic” courtesy of Wikimedia Commons.