Today was the ceremonial inauguration of Barack Obama for his second term as the 44th President of the United States. This is the 57th presidential inauguration in United States history. Obama is the 43rd person to hold the office of the presidency (Grover Cleveland served two non-consecutive terms).

The inauguration was held the day after the constitutionally mandated January 20th date because for the seventh time in history, the mandated date fell on a Sunday. Obama was inaugurated for his second term during a private ceremony held in the Blue Room of the White House.

Although the only part of the inauguration required by the constittution is the oath of office, all of the 57 presidential inaugurals have been as unique as the presidents and the times they served. 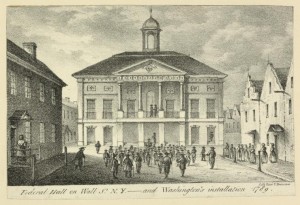 The first presidential inauguration was held on April 30, 1789 on the stairs of Federal Hall in New York City. New York City served as the temporary capital until the permanent capital in Washington, DC was built. Washington’s second inaugural address on March 4, 1793 in Philadelphia was 135 words, the shortest in history.

Thomas Jefferson was the first president to be inaugurated in Washington, DC on March 4, 1801. Six presidents were not inaugurated in Washington, DC including Washington and John Adams. The last was Lyndon B. Johnson whose first inauguration was on in Dallas on Air Force One following the assassination of John F. Kennedy. Johnson was the first and so far only president to be sworn in by a woman, U.S. District Judge Sarah T. Hughes.

Presidential fashion was changed on March 4, 1825 when John Quincy Adams was the first to wear long pants rather than knickers. 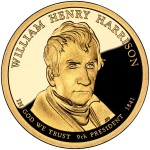 The longest inaugural address was presented by William Henry Harrison. His 8,445 word speech took more than two hours to deliver in the cold of March 1841. Harrison, a war hero, refused to wear an overcoat. He eventually caught pneumonia and died 32 days later making him the first president to die before completing his term in office. Of course this lead to John Tyler to be inaugurated as the first president not directly elected to the job by the people or the electoral college.

Speaking of ascension to the presidency by the Vice President, this has happened nine times. Aside from Tyler being the first, the last and most significant was probably Gerald R. Ford, who was appointed Vice President under the provisions of the provisions of the 25th Amendment to the U.S. Constitution. This made Ford the only president not to be elected to national office. 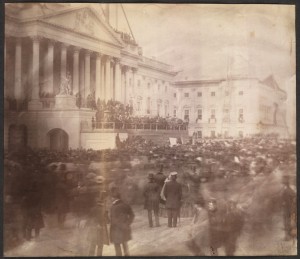 Photograph of the Inauguration of James Buchanan, March 4, 1857 by John Wood

Washington, DC is not known to have the best weather. Even the moving of the inauguration from March 4 to January 20 by the 20th Amendment (effective with Franklin D. Roosevelt’s second inaugural) has not done much to change this. Rain plagued ten inaugurations. It snowed for seven inaugurations. Even though the warmest was 55-degrees for Ronald Reagan’s first inaugural on January 20, 1981, he experienced the coldest inauguration for his second go around on January 21, 1985 when the mercury was 7-degrees. 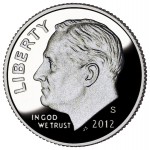 While Franklin D. Roosevelt was the only president to be inaugurated for four terms, Obama tied Roosevelt’s record for being the only presidents to receive the oath of office four times. Obama was given the oath of office a second time on January 20, 2009 after Chief Justice John G. Roberts, Jr. did not exactly get the words right the first time. This year, Roberts delivered the oath on January 20, 2013 as required by the constitution and then delivered it again on January 21 in a public ceremony.

Finally, following the tradition of all presidents, the 2013 Presidential Inaugural Committee commissioned an official inaugural medal that was struck in bronze, silver, and gold. Struck by the Medalcraft Mint of Green Bay, Wisconsin. Medals are available in bronze, silver, and gold. If you sign up for their mailing list, you will receive a code for discounts that can be applied to purchases. The last code I received was “2013” to take 15-percent off your order, but that could change as time passes. 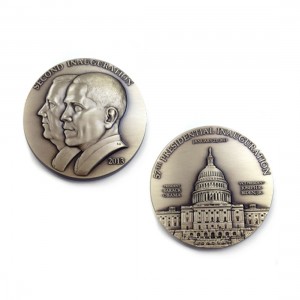 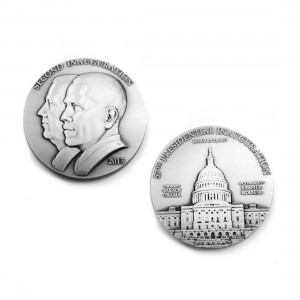 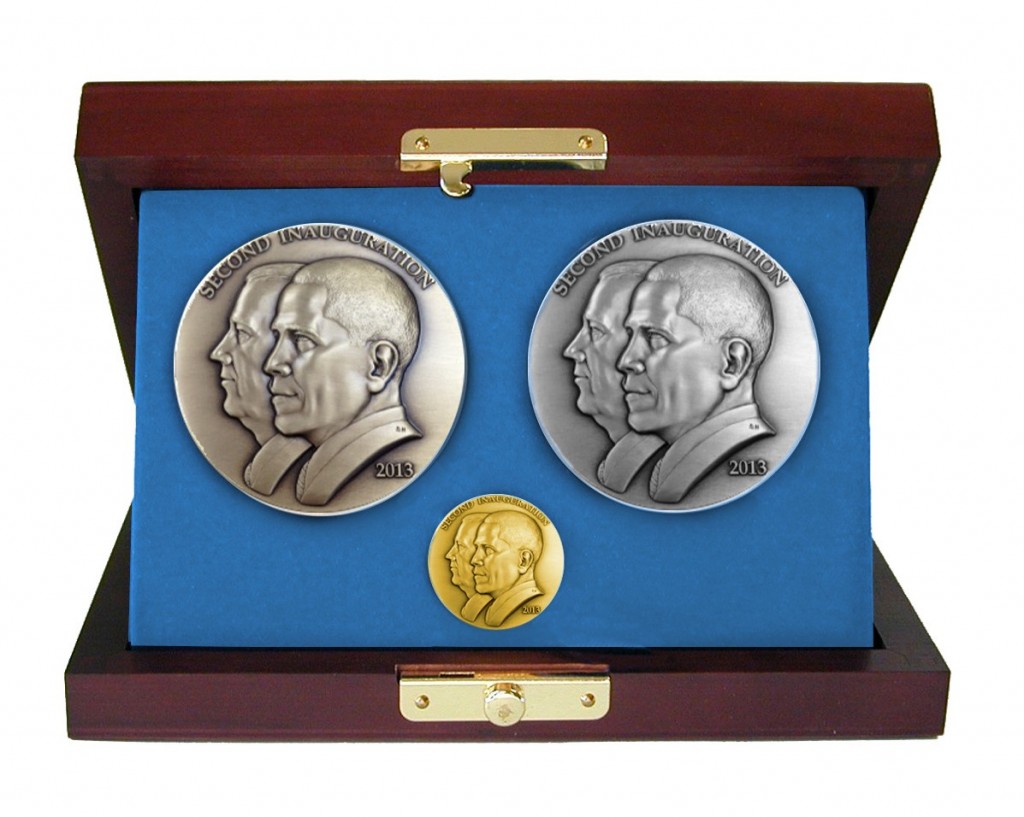