Last Day in the Big Easy

Saturday in New Orleans started with my sleeping late and checking out of my hotel. After I left my bags with the concierge and picked up a cup of coffee, I walked over to the convention center.

The weather was better than Friday in that it was sunny with a little humidity. If I had hair it would have been a different problem. But it was just cool enough to be comfortable as I walked over in my sports coat that I wore for the candidates forum.

I did a little looking around the floor and spoke with a few dealers. I did take the opportunity to stop by the booth of Miller’s Mint. I see Harry and Joan Miller at a number of larger shows and will see them next month in Baltimore. I did buy a few smaller items from them before the candidates forum. I will take a look at a few more items they have when I see them next month.

On my way to the candidates forum I saw people I recognized from visiting coin shows in the Mid-Atlantic region. Of course I handed them campaign material and went to the forum.

Just prior to the candidates forum, Jake Sherlock tweeted that the forum would be streamed live on YouTube. I wish they would have announce it sooner so that we could have ensured a larger crowd, but there seems to have been a few people watching with interest. There were two questions from the Interwebs. If we can do more of this, broadcast Board meetings, add classes, and Money Talks lectures, this would be a fantastic step forward.

One cool thing about having the Internet interaction was that during the forum, I tweeted:

Something to think about in the future: move the National Money Show out of graduation season to allow more people to attend the show.

Jake Sherlock, the ever diligent watcher of the Twitterverse responded:

@coinsblog The next three National Money Shows are scheduled for early March. Upcoming shows can be found here: ow.ly/kW1ST

Can you imagine if the Board can help better organize the use of technology, the ANA can reach more people and expand its education role not only for members but the public.

The candidates forum last more than three hours, longer than the scheduled two hours. A few of us had to do our summations early so that we could go to the airport to catch flights home. 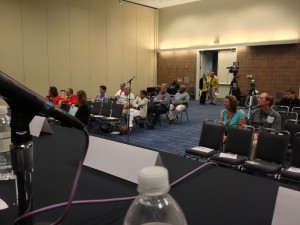 What the Candidates Forum looked like from my perspective.

I will have more comments on the candidates forum and what was said later this week.

After rushing out of the convention center, I quickly walked back to the hotel, collected my bags from the concierge, and caught a cab for the airport. Going through security screening is always fun, especially when your hip is made of titanium. That hip replacement guarantees that I will be patted down every time I go to an airport.

On my way to the gate I found a shop to buy coffee and headed to the gate. After typing notes on my iPad, I looked over and found Wendell Wolka waiting to board the same flight to Atlanta, where we would transfer to separate flights to head home.

After landing at the Baltimore/Washington International Thurgood Marshall Airport (BWI) and fetching my car, I arrived home at 1:00 PM with a rousing welcome from my two puggles Boomer and Tessa. Of course my wife was happy to see me!

In the next few days, I will talk about something I found and the candidates forum. For now, it is time to get some rest!