The other day I was talking with a someone who was not a coin collector to explain why I liked collecting coins. One of the reasons I mentioned was the thrill of the hunt. To be able to find that one coin to add to a collection or even reaching into my pocket and finding something interesting, even if it was not valuable.

To demonstrate what could happen, I reached into my pocket and happen to pull out what could be considered a type set of Jefferson nickels. I first found the 2012-P nickel that seems to now be in common circulation. Next was a 1982-D nickel with what looks like a filled “D” mintmark. For the time period, the blob for the mintmark was common and not worth anything more than a curiosity.

As I slid the 1982-D aside, I found the reverse the the Keelboat type 2004-P nickel. The person I was talking with was not aware of the Westward Journey nickel program commemorating the Lewis and Clark expedition to the west. I mentioned that the 2005 American Bison design was my favorite. Not only does it have the the American Bison on the reverse, the animal that most represents the country’s westward expansion, but the front has that wonderful bust of Jefferson designed by Joe Fitzgerald.

When I started to look at the last nickel, I said, “oh… this is older.” When asked how I knew before looking at the date, I explained how the relief had changed over the years. Using the four coins in hand, I could demonstrate how the relief and designs have been altered over the years to accommodate striking requirements. Even though the composition of the United States 5-cent coin has not changed since 1883 except for the silver-copper-manganese composition during World War II (1942-45), the U.S. Mint has lowered the relief of the coins in order to make the dies last longer and reduce production costs. According to the U.S. Mint’s 2012 Annual Report (PDF) it costs 10.9 cents to make one nickel. It could be more if the U.S. Mint had to use more dies to strike coinage for circulation.

I adjusted my glasses to see that the coin had the year 1956 then I flipped it over to see if there is a mintmark. When asked why I was looking for the mintmark on the back when it appeared on the front of the other coins, I said that up until 1964 the mintmark on the Jefferson nickel was to the right of Monticello and only if the coin was struck in Denver or San Francisco. Only the War Nickels had a mintmark prior to 1964. Luckily, I was able to demonstrate when a “D” mintmark appeared on the coin. 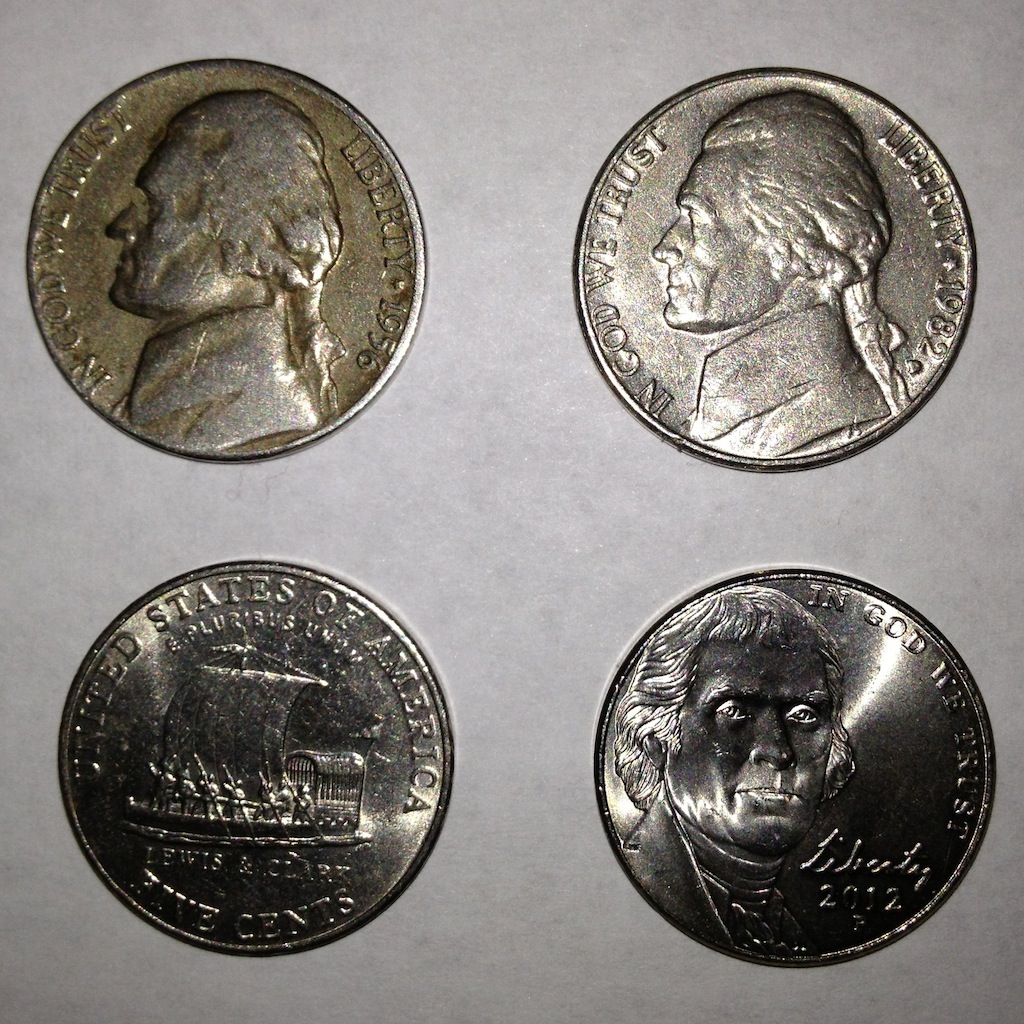 The next question was “How much is it worth?” Since the coin could be graded Good-4 at best, I said it would probably be worth 5-cents, face value. I decided to look up the price and saw that it was worth 6-cents! It is hardly worth the effort to sell. But the person that I was showing the coins found my little pocket-change type set was interesting.

Now that I have written about them, all four coins will go back into circulation for someone else to find. Who knows, maybe a young numismatist will find the 1956-D, think it is cool and add it to their collection. If you are in the Washington, D.C. metro area, you can be on the lookout for the 1956-D and other nickels I just wrote about. Happy change hunting!