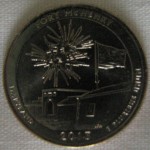 Word of Beanes’s capture reached Francis Scott Key, an accomplished lawyer, prosecutor, poet, and friend of Dr. Beanes. Key, who was known as a skilled negotiator and a very temperate man, was asked by the Army to accompany prisoner exchange agent Colonel John Stuart Skinner to Baltimore to secure the release of Dr. Beanes. On September 7, 1814, Key and COL Skinner dined with British officers abroad the HMS Tonnant to negotiate the release of prisoners. Although Beanes was released, the British would not let the men leave the ship because they had heard about the British plans to attack Fort McHenry.

Key, Skinner, and Beanes watched as the Royal Navy bombarded the fort and surrounding areas of Baltimore. As the smoke cleared on the morning of September 14, 1814, after 25-hours of bombardment, Key was able to see the U.S. flag still flying over Fort McHenry. Key was so moved by the sight that after returning home, he wrote the poem “The Defence of Fort McHenry.” The poem was published in the Baltimore Patriot on September 20, 1814.

Following the War of 1812, Baltimoreans celebrated the victory every year on September 12 but did not gain statewide recognition until the centennial celebration in 1914, even though the celebration was overshadowed by World War I. Celebrations waned during the Great Depression until it became an official holiday in 1957. Defenders Day would become popular again in the 1980s with the help of the National Park Service and the Fort McHenry Guard. 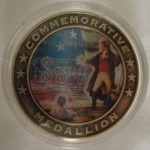 Obverse of the Fort McHenry Commemorative Medallion for sale at the gift shop. 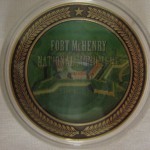 Reverse of the Fort McHenry Commemorative Medallion for sale at the gift shop.

This year, Defenders Day was celebrated on Friday, September 13. With a crowd of area students, area residents, dignitaries, and members of the Maryland State Numismatic Association, the Defenders Day celebration kicked off at Fort McHenry with the launch ceremony of the Fort McHenry National Monument and Historic Shrine quarter.

Speeches were interspersed with a performance from the Notre Dame Prep (Towson, MD) Choir, ceremonial drills from the Fort McHenry Guard, and the Fort McHenry Fife and Drum Corps. Prior to end of the ceremony, Treasurer Rosie Rios presented a special plaque with examples of the Fort McHenry Quarters to Superintendent Cappetta.

The ceremony ended with the dignitaries on the stage pouring a bucket of quarters into a old ammunition box.

Following the ceremony the dignitaries handed out quarters to to the students who sat through the ceremony. These children were attentive and appreciative of the ceremony and the quarter. 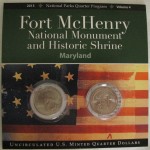 After the quarters were handed out, the students toured the park visiting the various stations setup to teach them about why Maryland celebrates Defenders Day.

On my way out of the park, I made the obligatory stop in the gift shop. Surrounded by students having fun looking at the items for sale, I found a card issued by the National Park Service with the Fort McHenry quarters commemorating the fort. The back of the card says that a portion of the proceeds are donated to the National Park Conservation Alliance. I also purchased a commemorative medal with a hologram on both sides. The images on the obverse commemorate the Star-Spangled Banner while the reverse shows the fort.

Not a bad way to spend the morning in Baltimore before having to return to work.

All images owned by the author.