One of the benefits of living in the Washington, DC area is the access to the great museums. Even better, most of them are free or charge a convenience fee to register for entry times online. A few weeks ago, I was able to take advantage of this when my nephew and nice brought their parents, my brother and sister-in-law, to the area in order to visit a few of the museums in the area.

After a late breakfast, we went to the United States Holocaust Memorial Museum. Aside from its mission to memorialize and teach the lessons of the atrocities during World War II it strives to educate people as to their responsibilities in the face of hatred and genocide while promoting human dignity. The museum is celebrating 20 years having been dedicated on April 22, 1993 and opening to the public on April 26, 1993. You can read more about the history of the museum here.

If you come to visit the Washington, D.C. area, I highly recommend that you allocate at least four hours to go through the museum. If you are like me and like to read everything, view all of the exhibits and displays, and watch all of the videos then you should consider scheduling more time.

What does the Holocaust have to do with numismatics? First, in some of the displays are scrip and coupons used mainly in Jewish ghettos for rationing of goods and services. It shows how an economy attempted to survive in the harshest of circumstances. While some of the scrip are reproductions, it gives the museum goer a sense of what those in the ghetto might have gone through.

Another group that created their own script were the Roma (Gypsies). Although the Roma were Aryan, they were persecuted as being inferior to the Germans. However, when they were rounded up and brought to the concentration camps, the Gypsies created their own order along with the other non-Jewish population as they were segregated in the camps.

There is not a lot of money-related artifacts, especially for the period following the start of World War II, but what is there shows its importance as part of the survival of the persecuted. The power of money was on display the movie Schindler’s List where Jewish artists were forced to create printing plates in order to counterfeit British money. In fact, the movie The Counterfeiters is about the counterfeit operation set up by Nazis to weaken the economies of the enemies.

Before leaving the museum requires a stop in the gift shop. Amongst the books and other items to help you remember your visit are the official medal and some smaller tokens. The medal is made of bronze and is about the size of a United States half-dollar (30 mm). The medal appears to be in a ringed holder that is embedded in a card. Two smaller tokens includes one that reads “What You Do Matters” and one with an image of a candle cut out from the metal with the words “Remember” across the top and “Never Again” on the bottom. Both tokens are 20 mm in diameter.

Obverse of the US Holocaust Memorial Museum Medal

Reverse of the US Holocaust Memorial Museum Medal 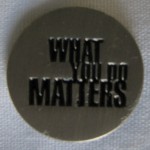 “What you do matters” refers to how you react in the face of genocide where ever it occurs matters.

“Always Remember” token with cutout of a candle.

Collecting coins, tokens, and medals of the places you visit is one way to enhance your collection. To complete the collection from this visit I also purchased three postcards. The postcards, medal, and tokens were placed in a page that holds three 4×6 items with two postcards in one pocket, the medal in its own pocket, and the tokens in the pocket with the single card. The page is in a binder with a note describing when I obtained these items, who I was with, and some other thoughts. Adding the note personalizes the collection and will remind me of the visit many years from now.