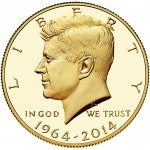 The American Numismatic Association issued a statement on August 28 about the 2014 World’s Fair of Money. As part of the statement, the fiasco of the Kennedy half-dollar gold coin was addressed.

Before I add my commentary, I do not blame the ANA or the U.S. Mint for the problems at the Kennedy Half-Dollar gold tribute sales. The ANA, U.S. Mint and those responsible for security at the show site did what they could in order to make this a smooth process. As I have said in the past, I blame the dealers who were responsible for hiring the people who caused the problems.

Let’s look at the statement:

“When the U.S. Mint announced the sale of its dual-dated gold Kennedy commemorative coin at the World’s Fair of Money, the ANA was hopeful that the release of such a popular coin would be a boost to the hobby and increase public interest in numismatics,” said ANA Executive Director Kim Kiick. “Unfortunately, the challenges created by the mass of people trying to buy the coin became a concern for public safety, both at our show and at the U.S. Mint’s retail sites in Philadelphia, Denver and Washington, D.C.”

As I investigated further, there appears to have been less of a problem at the Washington, D.C. headquarters because the dealers involved hired actors to stand in line for them. Although the actors were not told what the “audition” was about, witnesses say that the actors were better behaved than the other line standers.

The image of the situation in Denver is haunting in regard to security. People lining up for a three-quarter ounce of gold that was selling for $1,240 and even more on the secondary market would make anyone nervous.

Public safety was the ANA’s top concern after the U.S. Mint announced that it would debut the coin at the World’s Fair of Money. Kiick commended the efforts of PPI Security, the staff of the Donald E. Stephens Convention Center, the Rosemont Police Department and ANA staff and volunteers for maintaining order. She also expressed disappointment that many of the coins were bought by people paid to stand in line.

Given the millions, if not billions of dollars in coins, currency, and other merchandise in the convention center, it is amazing that nothing else happened. Reports suggested that the crowd standing in line at the Stephens Convention Center were not collectors and their behavior was not what would be expected at an ANA show.

“The intent of the U.S. Mint was to sell its allotment of 2,500 coins to 2,500 different people, putting these coins into as many different hands as possible,” Kiick said. “The hiring of proxies to stand in line and receive the coin for somebody else not only went against the spirit of the sale, it hurt the ANA. The ANA is responsible for paying for extra security and damages to the exterior of the convention center brought on by these crowds.”

In an article by Dave Harper of Numismatic News, this is not the first time that this type of situation has occurred. Harper recalls the story by California dealer Ron Gillio who purchased 1968 proof sets in Denver using college students.

While the U.S. Mint has announced that it plans to continue offering new coin releases at the World’s Fair of Money, Kiick said any future sales are contingent on whether the Mint and the ANA can put together a security and sales plan that will address the concerns raised from the Kennedy sales.

“We love having the U.S. Mint at all of our shows, and we certainly enjoy seeing the Mint bring exciting new products to the marketplace that will increase public interest in the hobby,” Kiick said. “However, the problems we experienced this year far outweigh the benefits. There will be no onsite sales in the future unless we can come up a new sales process to avoid the problems encountered at the various U.S. Mint sales locations.”

One way to control the sales at the ANA shows is to limit the sales to ANA members. ANA members have membership numbers and their membership information stored in an ANA database. If you are a member and want to purchase a newly released U.S. Mint product, you register with the ANA and receive a ticket. The ticket would be printed with your membership number and would identify you should something happen. The ticket would be non-transferrable.

Once the ticket is issued, it will be the responsibility of the member whose number is on the ticket to act in accordance with the ANA Code of Ethics. If the member transfers the ticket, the member remains responsible for the behavior of the person holding the ticket. If the ticket holder disrupts the proceedings, the member whom the ticket was issued to is responsible. That member would then be subject to appropriate disciplinary actions including legal action, if necessary.

Before anyone argues what is “right&rdqui or “fairness,” the ANA can and should do what is in the best interest of the ANA. It is the ANA’s show and the ANA can run the show way it sees fit. If the ANA wants to limit access to members, as a membership-only organization, they can limit access to the bourse floor, even to the U.S. Mint.

If you do not like it, look at the video of what happened in Denver and blame the dealers who created this issue.