Silver costs drive down the costs of collector coins 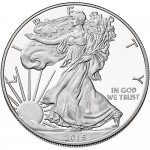 I attach no meaning to these number except that it has allowed the U.S. Mint to lower the price of silver coins.

The changes that were announced are as follows:

This year, the U.S. Mint has started selling the 2015-W American Silver Eagle Proof collectors coin earlier than in previous years. In fact, I have already received my coin.