Why are greenbacks green?

NOTE: I am doing research into the policies that create our money. This is not a look into the economic policies but what happened after the economic policies are executed. For this series of articles, I wanted to know what happened after it was decided that the country would sell bonds in order to fund the Civil War. This is a summary of some of the research to answer one question and tie it in with history.
First of three parts.

Did you ever want to know how or why something was done but there was no answer? Or there may have been answers but nothing definitive that would make any of the answers true? It is this type of curiosity that had me searching for the answer to one question:

Why is the greenback green?

There are references that claim that the green printed back was to differentiate the currency of the United States from those from other countries. Other references call it an anti-counterfeiting mechanism. Neither claim can tie themselves to the actual events in such a way that we can say which is the truth. Or can we? 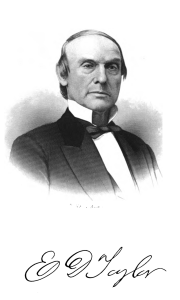 For the history of the greenback, we have to start with Col. Dick Taylor. Born Edmund Richard Taylor on October 18, 1804 in Lunenburg County, Virginia. His father was Giles Taylor, brother of Col. Richard Taylor. The decorated Col. Taylor was the father of Gen. Zachary Taylor who would become the 12th President of the United States.

Shortly after Taylor’s birth, the entire Taylor family moved to Kentucky because of exhausted lands in southern Virginia. They settled along the Ohio River outside of Louisville. In 1814, Giles moved his family Shawneetown, Illinois as one of the area’s pioneer settlers. Unfortunately, Giles died shortly thereafter leaving the family of little means.

Preferring to be called by his middle name, Taylor would be referred to by the common nickname of Dick and began travelling throughout the Midwest region to earn a living. At this time he would sign his name as “E.D. Taylor.” Dick Taylor demonstrated a lot of skill in organizing while operating as a trader on the frontier. By 1929, Taylor settled in Springfield, Illinois and married Margaret Taylor, the daughter of Col. Richard Taylor and sister of then Col. Zachary Taylor.

When the Black Hawk War broke out in 1831, he enlisted in the Illinois infantry and appointed as a colonel by the governor where he served with Jefferson Davis, General George Jones, and General Henry Dodge. Following the war he was elected to the Illinois House of Representatives then, after one term, was elected to the senate defeating a long-standing senator.

Taylor ran his senate campaign on a platform to move the capital from Vandalia to Springfield. To accomplish this, Taylor wrote a bill and worked with a representative named Abraham Lincoln, whom he met as a shopkeeper in New Salem. The bill was successful and Springfield has been the capital of Illinois since.

Taylor was a master at managing money and served the state in many capacities. In 1835, Taylor was appointed Receiver of Public Moneys in Chicago. Today, that position would be known at the comptroller. Under Taylor’s guidance, Chicago managed land sales better than any other city in the country and grew Chicago into the second largest city in the United States passing Philadelphia for that distinction. He was so well regarded in Washington, that not only did President Andrew Jackson hold a special dinner in Taylor’s honor, but appointed him to the commissions that oversaw the building of railroads in the upper Midwest.

With his connections from Springfield and working with Jackson, who is considered the father of the modern Democratic Party, Taylor became a member of the party and helped build the political machine that continues to run Chicago today. He was a friend and staunch supporter of Stephen A. Douglass and would travel the state stumping for Democratic candidates.

Taylor did not forget his friendship with Lincoln. Even though Lincoln had joined the then nascent Republican Party, he would also campaign with his friend in areas that were not strong Democratic strongholds. But for the presidential election of 1860, Taylor supported Douglas and campaigned throughout Illinois against Lincoln.

Lincoln was not a man to hold grudges and continued to seek advice from his friend especially on financial matters. In 1862 there was an impending financial crisis because of the Civil War and the hoarding of hard currency. Banks were failing because of liquidity problems and Secretary of the Treasury Salmon P. Chase was working with New York bankers to try to finance the government. Chase worked with Jay Cooke & Company to issue bonds but needed a way to make it liquid to stimulate the economy.

Knowing how Taylor turned around the finances of Chicago and then the railroad alliance, Lincoln turned to his old friend for advice. Taylor convinced Lincoln to ask congress to issue currency backed by the bonds but with no interest. Using what he learned in managing tickets sales for the railroads, Taylor provided Lincoln the outline for a currency system that was adopted with much reluctance by Chase.

First published in Abraham Lincoln, author Emil Ludwig found a letter acknowledging Taylor as the person who came up with the idea:

I have long determined to make public the origin of the greenback and tell the world that it was Dick Taylor’s creation. You had always been friendly to me. and when troublous times fell on us, and my shoulders, though broad and willing, were weak, and myself surrounded by such circumstances and such people that I knew not whom to trust, then I said in my extremity, ‘I will send for Colonel Taylor — he will know what to do.’ I think it was in January 1862, on or about the 16th, that I did so. Said you: ‘Why, issue treasury notes bearing no interest, printed on the best banking paper. Issue enough to pay off the army expenses and declare it legal tender.’ Chase thought it a hazardous thing, but we finally accomplished it, and gave the people of this Republic the greatest blessing they ever had — their own paper to pay their debts. It is due to you, the father of the present greenback, that the people should know it and I take great pleasure in making it known. How many times have I laughed at you telling me, plainly, that I was too lazy to be anything but a lawyer.

Yours Truly.
A. Lincoln

Lincoln, not one to miss an opportunity, used his executive authority to begin the production of a national paper currency in the form of Demand Notes as an extension of the Act of July 17, 1861 (12 Stat. 259) that authorized the printing of fractional currency.

Since the federal government did not have printing facilities, the law was written to allow notes to be produced by a “New York bank note company.” The first four issues fractional currency were printed by the American Banknote Company and the National Banknote Company. By the fifth issue, the new Bureau of Engraving and Printing began to print these notes. 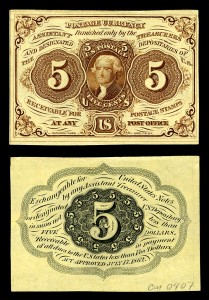 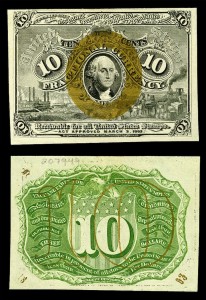 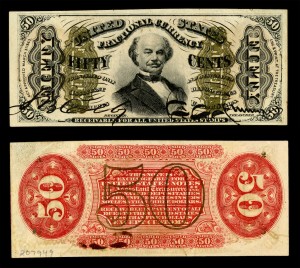 To save time and money, the first series of notes were printed four and six to a sheet in New York then shipped to Washington where the Treasury set up the Office of the Currency Comptroller to manage. As par of the OCC, the National Currency Bureau was created to do the cutting, bundling, and distribution of the currency. 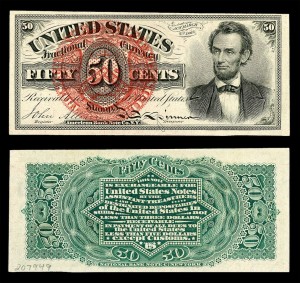 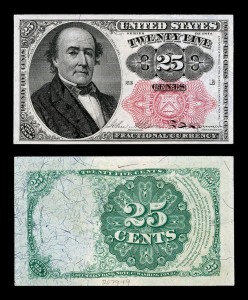 The process for the United States to print its own currency had begun. While Secretary Chase was leading the plan to build a printing operation, congress authorized Treasury to establish an engraving and security printing bureau. That law was approved on July 11, 1862 (12 Stat. 532). With construction for a printing facility underway, Treasury hired James Duthie as the first engraver. Although he was a temporary engraver, he was provided a $1,600 per year salary (the equivalent to just under $38,000 in current dollars).

In Part 2 we introduce you to a little known geologist who may have developed more than the theory of the greenhouse effect.