History for a half-dollar 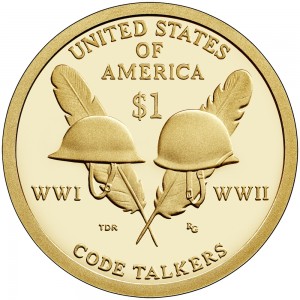 Last year, I wrote that one of the most under appreciated coins currently being produced by the U.S. Mint are the Native American Dollars. Featuring the portrait of Sacagawea with her infant son, Jean Baptiste Charbonneau, was designed by Glenna Goodacre for the original Sacagawea dollar that began production in 2000. Since 2009, the reverse was changed as part of the Native American $1 Coin Act (Pub.L. 100-82). Under the law, the reverse of the one dollar coin “shall depict images celebrating the important contributions made by Indian tribes and individual Native Americans to the development of the United States and the history of the United States.”

The reverse designs has represented some of the best work by the artists working with the U.S. Mint with the 2016 design continuing the record. Celebrating the Native American Code Talkers who were instrumental in using their native language to communicate troop movements and enemy positions, the reverse of the coin celebrates their work.

As someone who has made a career in technology and information security, the concept of using something as low-tech as a language that nobody else can translate to openly communicate secret information is an elegant solution. It proves that technology is an answer but not the only answer. It makes these people heroes for their service to a country that has not treated their people fairly over the course of history.

Learning and honoring the history of Native Americans was the goal of the Native American $1 Coin Act. It is a simple yet effective way to bring history to the masses. Although the dollar coin does not circulate well, it is still a nice way for the country to teach and honor history. 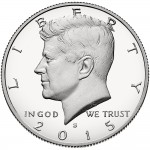 I don’t think JFK would mind using the reverse to honor U.S. history!

I was thinking about what could be done to honor other aspects of United States history. Why not use another coin to celebrate something that has shaped the country in some way. With over 200 years of history, there is a lot to choose from. I propose that beginning in 2017 the reverse of the Kennedy half-dollar be changed every year to celebrate an anniversary of something significant in U.S. history.

As I consider writing a draft version of the bill to send to my representatives in congress, I know that any good coinage program in the United States should have some guidelines. Far be it for congress to tell the U.S. Mint to do what it thinks is right. In order to satisfy something that congress would adopt and create a meaningful program, how about a Half-Dollar history program as follows:

Although there was no such thing as having a minor when I went to college, I did use some of my elective credits to take some classes in history and political science. Add my masters in public policy and some people wonder why I don’t run for office (I hate the idea of begging for campaign contributions). With that background, I was able to think of a few historical events that could be honored over the next few years:

2017: The 150th anniversary since the U.S. purchased the Alaska territory from Alexander II of Russia by Secretary of State William H. Seward in 1867. This was so unpopular at the time it was called “Seward’s Folly.”
2018: World War I ended on the 11th hour of the 11th day of the 11th month of 1918.
2019: “What hath God wrought” was the message of the first telegram message. It was sent from the U.S. Capitol to the B&O Railroad depot in Baltimore 175 years ago.
2020: The 100th anniversary of the passage of the 19th Amendment granting suffrage for women
2021: The 50th anniversary of the passage of the 29th Amendment that lowered the voting age to 18.
2022: Celebrating 75 years of technical innovation. In 1947, Dr. Edwin Land introduced the Polaroid Land Camera, broadcast of the first World Series game, the USS Newport became the first warship that was fully air conditioned, Chuck Yeager breaks the sound barrier, and Bell Labs scientists introduces the first semiconductor are just some of the innovations to celebrate.

Purposely missing from this list is the 75th anniversary of Jackie Robinson’s becoming the first African-American to appear in a Major League Baseball game in 1947. I fully expect that a commemorative coin will be issued for that event. If it is not, then congress should be ashamed of itself for not doing so.