For as long as there has been money or commerce, there has been some form of credit. Whether it was borrowing a few coins until the next payday or today’s credit cards, credit has been a fuel of economic development for quite some time. The financial industry is built on credit and charging customers to borrow money and spread the payments out over time. By some estimates the average household owes over $16,000 in credit card debt.

The United States was founded on credit. During the founding of the country currency had been limited to coins with an intrinsic value based on their gold, silver or copper content. As the King of England tried to tax the colonies to pay for the wars in Europe, the colonies looked for ways of financing their own governments to provide services. they issued paper notes. These notes functioned as currency but actually were bills of credit, short-term public loans to the government. For the first time, the money had no intrinsic value but was valued at the rate issued by the government of the colony in payment of debt. Every time the colonial government would need money, they would authorize the printing of a specified quantity and denomination of notes that it would use to pay creditors. The emission laws also included a tax that would used to repay the bill of credit and the promised interest.

Later, the era we now refer to as Obsolete Banknotes (or Broken Banknotes), were currency issued by banks under permission of the Department of the Treasury that were supposed to be backed by the assets of the issuing bank. Banks were supposed to be able to back at least 90-percent of the value of the notes with hard currency. But the banks were not honest with the Treasury Department, issued more currency than assets, and many went out of business because they could not cover the value of the notes issued.

Credit run amok has been the cause of nearly every major market downturn in history including the most recent dire recession that began in 2008.

The concept of institutionalizing consumer debt was first written about in Looking Backward, 2000 to 1887 by Edward Bellamy. Bellamy, a writer from Massachusetts, wrote about Julian West, a young American who falls into a deep, hypnotic sleep and wakes up in the year 2000. As part of West’s experience, Bellamy describes purchases being made using a credit card. Bellamy’s credit card was limited to the amount on deposit. The description is more like a debit or secured credit card of today. After the book became popular, the concept of consumer credit began to be institutionalized.

Hotels and other higher-end retailers were first. They would create medals or tokens that could be carried in the pocket or have a hole to include them on a keychain. Much like the Colgate tokens previously written about, the use of metal tags and tokens began at the beginning of the 20th century and was stopped by the War War II efforts.

Credit tokens were nondescript items with the name of the establishment and the user’s account number which lead to a number of problems. Since the account number was engraved into the tag, it was up to the cashier to write down the account number. Mistakes would lead to unpaid bills. A later improvement was to include raised letters that could be rubbed onto the paper using a pencil or carbon paper in order to record the number correctly, a feature that would be added to the plastic charge plate before the invention of the magnetic strip.

These tokens did not include the customer’s name. Although many can be mailed to the company so that the keys could be returned to the original owner, thieves would keep the tokens and use them. Stores would later have to produce lists of invalid or stolen charge numbers to verify the sale at the register. In the day before computers, this was a time consuming task.

Stores continue to think the risks are worth dealing with since credit purchases appear to be more popular than cash-based purchases.

One of the early adopters of credit purchases was Abraham & Straus, Inc. Founded in 1865 by Abraham Abraham in Brooklyn, the store was operated on Fulton Street as a small clothing outlet until its later flagship store was built closer to downtown Brooklyn in 1883. As part of expanding the store and funding the move, Abraham received funding from Nathan and Isidore Straus. When the company reopened at 422 Fulton Street the was renamed Abraham & Straus, the name that was used until its closing in 1995. 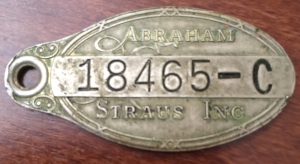 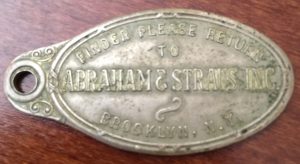 If found return it to A&S in Brooklyn!

Known as A&S throughout the New York metropolitan area, it was a little more upscale from other discount stores of the time. Although the stores expanded as far as the Philadelphia region, it would not see the same success as the New York-area stores. A&S was a favorite amongst the burgeoning middle class of the post-World War II Baby Boomer generation especially for women’s clothes. I have a lot of memories waiting outside of the A&S with my father at the Green Acres Mall in Valley Stream, NY as my (late) mother would go shopping in A&S. And the family car, a black 1963 Chevy Impala with red interior, did not include air conditioning!

Apparently, I survived those shopping trips along with my recent find an on old A&S credit token. While searching through a cigar box of old tokens, I found this pre-World War II item. Aside from bringing back the memories, and reminder of the hot days waiting for my mother to try on nearly every dress in the store, I though this would be a perfect addition to my collection of New York numismatic memorabilia.

Remember, you do not have to collect coins to have fun with numismatics!

NOTE: Electronic versions of Looking Backward, 2000 to 1887 by Edward Bellamy can be downloaded from Project Gutenberg.