Yesterday I wrote about the announcement that the fifth edition of A Guide Book of Morgan Silver Dollars by Q. David Bowers will include evidence that a 1964 Morgan Dollar exists or has existed. As part of their press release, they sent out an image of the cover with the coin. I questioned whether this is real given that their image appears to be of a circulated coin.

After the story posted I have heard from a few readers in private email (I wish you would post it to the page for everyone to read) strongly on one side or another. One person asked why I question the well-respected Q. David Bowers. I responded that just because he is respected does not mean he is not fallible. Bowers is still human and can make mistakes. Besides, we do not learn about our world if questions are not asked.

To add to the suspicion, if you look at the image carefully, there appears to be doubling in the portrait. Look at the left side of Liberty’s face in the image of the 1964 coin and see the doubled image. There is also doubling over Liberty’s throat. Compare it to a known mint state Morgan Dollar and the questions mount. 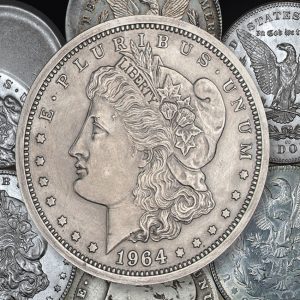 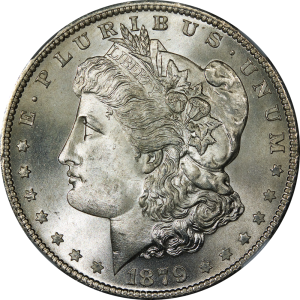 You decide! Click on the images to enlarge and use the slideshow controls to examine both coins. Do you see the doubling? Do you see the wearing? What do you think?


Do you think the report of the existence a 1964 Morgan Dollar is real?