Proof was in the change 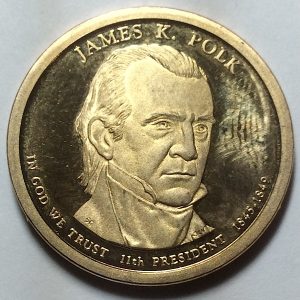 Sometimes I am amazed at what other people find in their daily change. While I tend to pick up a few foreign coins or some old wheat cents, I have never picked up anything really interesting until the other day.

During a visit to a numerically named convenience store for a cold beverage, I noticed that there were a few “golden dollars” in the register. The cashier hesitated to give them to me but I told her I was a collector and was interested especially since the one on top was very shiny. After trading three paper notes for the coins my suspicion was correct. The coin is a 2009-S James K. Polk Presidential dollar.

While the coin can be used for one dollar in trade, whomever purchased it paid more and could have sold it for at least $5 rather than placing it in circulation. While we do not know the conditions that caused this coin to be in the cash register at the time I stopped in the store, it has been rescued from circulation and will find its way into a collection. I will probably add it to my coin club’s charity auction this December.