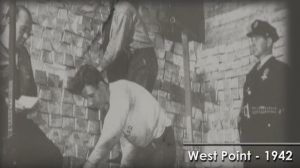 While we cannot tour or see inside the Bullion Repository at Fort Knox, Kentucky, the U.S. Mint just released a B-Roll video of scenes inside the gold repository at the West Point Mint.

Gold stored at West Point is called “working stock.” This is the gold that the U.S. Mint uses for striking coins. Depending on the demand, the gold you will see in the video will not be there in a year. It will be used for American Gold Eagles, gold commemoratives, and gold medals cast for congress and the president.

West Point is the primary manufacturer of gold bullion coins.

Video courtesy of the U.S. Mint.