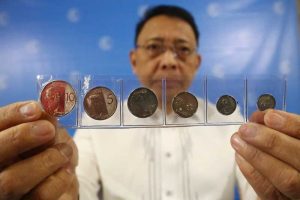 Philippines Rep. Jericho Nograles holds newly release BSP coins noting they “are misleading the public and are causing a lot of confusion.” (Miguel de Guzman of the Philippines Star.)

A story that might sound a bit familiar to anyone who was around to experience the launch of the Susan B. Anthony dollars is the story how a design decision made by the Bangko Sentral ng Pilipinas (Central Bank of the Philippines or BSP) causes confusion about the denomination of two coins.

In the Philippines, the BSP made the mistake of making the one-peso and five-peso coins very similar in size, look, and feel. It is so bad that a member of the Philippines Congress is urging the BSP to recall the coins.

“Basic design principles for coinage demand that the denominations are easy to distinguish not just visually, but also through touch or tactile differences,” said Rep. Jericho Nograles. “Our new coins fail in these principles.”

The story almost reads like discussions others have had with coin design issues when Nograles asks, “Did the BSP consider jeepney, pedicab, tricycle and taxi drivers? Did they consider the visually impaired, and senior citizens, at all?”

They likely did not and will have to be dragged into reality kicking and screaming like the Bureau of Engraving and Printing had to be over the same issues.

You may want to check your pockets to look for one of the most elusive Korean coins there is — the 1998 500 won coin. Though the odds of you finding one of these coins is almost nil, you never know when you might just hit the jackpot — stranger things have happened.

A hoard of rare bronze Jewish Revolt coins has been discovered at the recently renewed Ophel excavations. The trove of dozens of bronze coins minted during the last years of the ill-fated four-year rebellion of the Jews against Roman rule was uncovered in a cave just south of the Temple Mount by Hebrew University archaeologist Dr.

Haul of feudal coins in Saitama could total up to 260,000

KUMAGAYA, Saitama Prefecture — One of the biggest hauls of medieval coins ever discovered in Japan has been unearthed in Saitama Prefecture. Tens of thousands of bronze coins were found in a buried ceramic jar believed to date back to the first half of the 15th century.

The first coins to be issued marking the reign of King Rama X will be put into circulation on April 6, Finance Minister Apisak Tantivorawong said on Wednesday. The new coins would replace existing coins, which were exiting the economy.

The decision of the Bangko Sentral ng Pilipinas to introduce a new series of coins was meant to deter foreign entities from stealing large quantities of the local specie to extract their nickel content.

The Queen carries out the Royal Maundy service at Windsor Castle without the Duke of Edinburgh.