All the news that fits, we print! 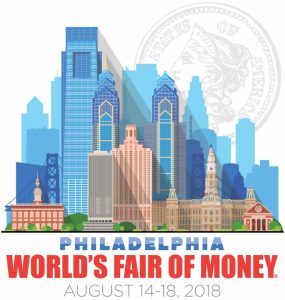 Based on some of the press releases, here are some of the highlights for those who will be in attendance:

In other words, it will be a jam-packed week for the numismatic junkie.

Too bad the show cannot be live-streamed for those of us who either cannot attend or will only be able to attend for a short period of time.

I will attend the World’s Fair of Money on Thursday and will leave after the ANA Board Meeting on Friday morning. More on this later.

A gold coin from the time of Andronicus II and Andronicus III Paleologus (14th century) has been discovered during archaeological excavations at the Rusokastro Fortress site on Bulgaria’s southern Black Sea coast, the Regional Historical Museum in Bourgas said.

Tiny hands fly up, waving pastel green play money in the air as children offer up bids with high-pitched, eager squeals. “I have $6!”

It has been revealed that Lord Ian Stewartby, who resided near Biggar and died in March at the age of 82, left £1.8m worth of his nationally-renowned collection of ancient coins to Glasgow University’s Hunterian Museum.

It was originally worth five shillings but Australia’s rarest coin, believed to be discovered in a bushranger’s hoard, is on the market and expected to fetch more than $500,000. For the third time in its history, the “Hannibal Head” holey dollar, discovered in Tasmania in 1881, and presented to the Governor of Van Diemen’s Land, Sir John Henry Lefroy, is being sold by Melbourne coin house Coinworks.

More than nine months after they stopped being legal tender, about 169m round £1 coins are outstanding.