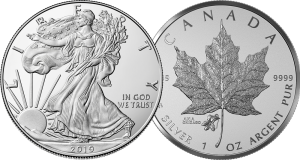 The most interesting news of the week was not printed by a media outlet but by the Government Printing Office. On May 23, 2019, the GPO published an entry in the Federal Register saying that the U.S. Mint has priced the Pride of Two Nations Limited Edition Two-Coin Set at $139.95.

Which two nations? Of course, if this is coming from the U.S. Mint, one of the countries is the United States. However, several reports claim that the second nation is Canada.

Production will be limited to 250,000 sets, according to the source.

The coins will be packaged and marketed by the U.S. Mint. The Royal Canadian Mint will also take orders for the set that will be fulfilled by the logistics contractor working for the U.S. Mint.

The source did not have information about the packaging.

The set will go on sale at the beginning of the World’s Fair of Money via Internet and telephone ordering only. Falling under the category that we can no longer have nice things, the U.S. Mint’s reticence to open sales at shows is a result of the fiasco that occurred when they released the 2014 50th Anniversary Kennedy Half-Dollar Gold Proof coin at that year’s World’s Fair of Money.

Of course, no dealer was penalized by the American Numismatic Association for disrupting the World’s Fair of Money or setting the conditions that disrupted the distription outside of the Denver Mint.

ST. GEORGE — Glen Canyon National Recreation Area’s investigation of centuries-old Spanish coins that were turned into the park has provisionally concluded the coins are authentic. However, according to a news release from the National Park Service, the two small coins were probably part of a modern coin collection, perhaps accidentally or intentionally dropped by a visitor to Lake Powell.

Should the Harriet Tubman $20 bill be delayed? The currency process, explained

Editor's note: This story has been updated to include the newest mock-up of the Harriet Tubman currency from the advocacy group Women on 20s. WASHINGTON – The Trump administration says it needs until 2028 to release a new $20 bill featuring abolitionist hero Harriet Tubman.

The coins and a silver ingot, believed to be worth £500,000, were seized in Durham and Lancashire.

What is the least valuable British coin ever?

Is the current 1p piece the least valuable British coin since the currency was unified in 1707?