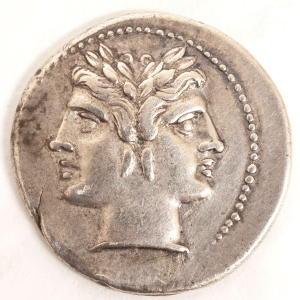 Continuing the Museum Week celebration, there was an announcement from another numismatic exhibit added to the online world. The Walsh Library of Seton Hall University announced the addition the D’Argenio Collection. The collection consists of 427 rare coins from ancient Greece, the Roman Republic, the Roman Empire, and Byzantium.

Donated to the university by Ronald D’Argenio (MS’76/JD’79), the collection allows scholars “to trace the relationship of the earliest Roman coins of the Republican period to its immediate Greek predecessors. It includes coins with images of Julius Caesar, the first Roman leader to have his portrait represented on a piece of currency.”

The online exhibit is in two parts: