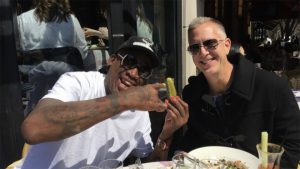 Sports fans looking for an outlet are attracted to The Last Dance on ESPN. The 10-part series chronicles the Michael Jordan and the 1997 Chicago Bulls’ quest for a second three-peat. The last two one-hour episodes start tonight, Sunday, May 17, 2020, at 9:00 PM Eastern Time.

One of the players making an impact of the story early and later is Dennis “The Worm” Rodman. Today, Rodman may be known for his outrageous style and friendship with North Korean leader Kim Jung Un, but when he was playing, Rodman put the term “power” in his position of Power Forward. He started his career with the Detroit Pistons, the Bad Boys of basketball, who dominated the Bulls to win a pair of championships.

Rodman signed with San Antonio as a free agent in 1993 then was traded to Chicago before the 1995-96 season. In Chicago, he went on to win three straight championships.

Throughout Rodman’s journey in the NBA was his friend and agent, Dwight Manley.

The numismatic community knows Manley as a collector and the person who the ANA’s Dwight N. Manley Numismatic Library is named. Among the support that Manley provided to the ANA, he donated the first known illustrated numismatic book printed in 1517.

In a recent interview, Manley spoke about purchasing the Collection of William Spohn Baker that features the finest Washington Medals known to collectors. He said that the ANA would exhibit the medals in 2021. In the future, the medals will likely be in a museum because he feels that the collection should not be broken up.

It may not be easy to impact one area, but Manley can claim he had an impact on sports and numismatics.

The Worm's former agent talks about the similarities between collecting and representing the most iconoclastic athlete of his era.

To modern archaeologists, ancient coins whisper secrets about the life in their times. A bronze coin dating back to time of the Bar-Kochba revolt recently uncovered in Jerusalem’s Old City makes no exception.

→ Read more at jpost.com
How Coins Are Made: Design and Selection Process | U.S. Mint

The U.S. Mint produces millions of coins a year, some that you use in daily commerce and some just for collecting. If you’ve ever been on a tour of the Mint at the Philadelphia or Denver facilities, you learned about how coins are made. But what happens before the coin production process begins?

“An exceptional gift for exceptional people” –that is how Czech Mint describes a new issue of coins which are to serve as a thank-you gift to those who fought on the front lines or simply pitched in to help in the battle against coronavirus. The issue, a joint project of Czech Mint and the Czech Red Cross, gives people the chance to express their gratitude and highlight stories of personal courage in the face of the pandemic.