Any time news is published about someone finding a hoard that has been buried for centuries, it is guaranteed that I will read the story. If coins are history in your hand, then buried treasure is history speaking to us.

In other areas, treasure hunters use metal detectors for hunting the countrysides looking for something to make them rich. Hunting treasure using metal detectors is a popular hobby in Great Britain. Hobbyists have uncovered coins and other artifacts dating back to the Roman conquest of Britain. More recent finds led to new information about the Viking conquest of the British Isles.

While the knowledge gained from these finds provides insight into history, the treasure hunters find themselves in trouble.

In places where archeological digs are sanctioned, there are no controversies. The finds in those digs are the property of the country. However, in Great Britain, where people hunt without government sanction, the finds are becoming controversial.

Although the United Kingdom has some of the most comprehensive laws that help private citizens protect their finds, other laws like property rights and antiquities laws can turn euphoria into an instant headache. 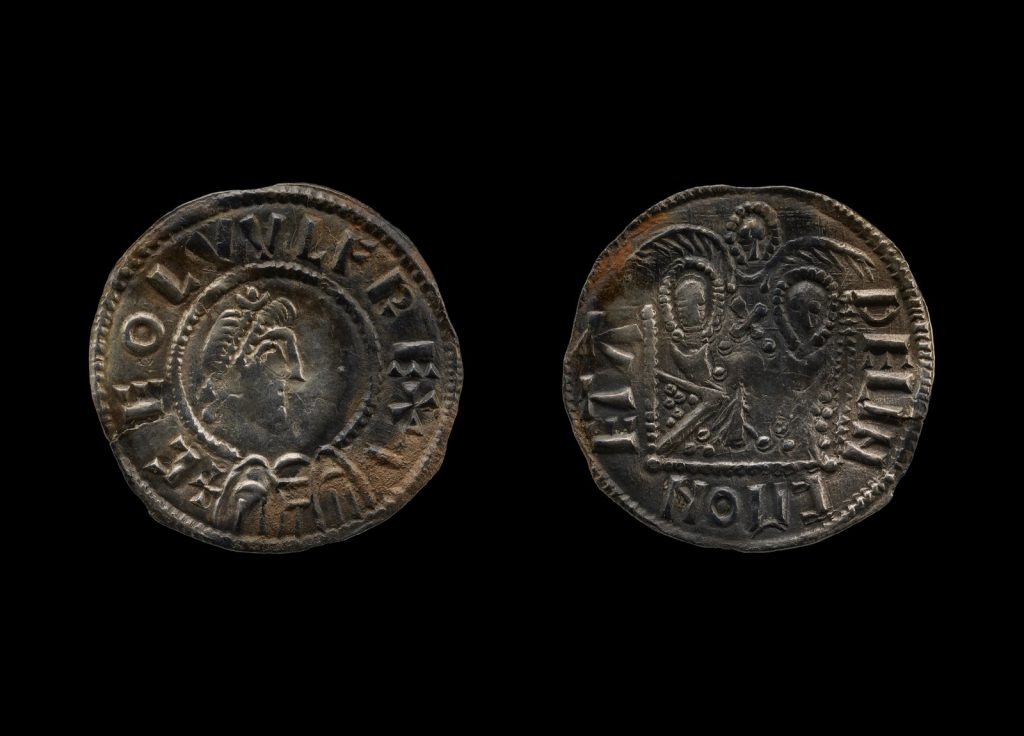 Ninth-century coins found by metal detectorists in the UK feature a representation of two contemporary Anglo-Saxon kings—Ceolwulf II, of Mercia, and Alfred, of Wessex—sitting side by side. The discovery that Alfred and Ceolwulf minted coins in the same style offered surprising evidence of an alliance between them—one that Alfred had sought to whitewash in an official chronicle of the period. As Gareth Williams, a curator at the British Museum, explains, “It’s like Stalin airbrushing Trotsky out.” The coins have caused a controversy over where and how it was found.
(Photograph courtesy © the Trustees of the British Museum via The New Yorker, whose caption was used here)

The laws are different in the United States. If you have permission to hunt with a metal detector and dig on the property, whatever you find is yours. The history of archeological policy in the United States recognizes that North America’s colonization is around 400 years old. Policymakers recognized that settlement history was very well documented compared to other countries, making it unlikely for anyone to make significant finds.

There are exceptions to the basic finder’s keepers rule regarding finding Native American artifacts and evidence of past civilizations. Otherwise, as long as you have permission to search the area, you can keep what you find.

These post-find issues can turn the story of these finds into fodder for a true-crime story.

The Curse of the Buried Treasure

South Korea is working on replacing its frequently used 100-won coins as the design includes a portrait drawn by an artist who was pro-Japanese during the colonial period, the country’s central bank said Tuesday.

Four gold coins were recently discovered inside a pottery jar found during an excavation in the Western Wall Plaza of Jerusalem's Old City. The precious 1,000-year-old coins reflect the political and historical shift of power between the two Muslim dynasties that ruled the city at the time.

Valley, Ala. (WTVY) -An Alabama lawmaker is sponsoring a bill that would force merchants to return coins to customers. Rep.

→ Read more at wtvy.com
This Mysterious Coin May Provide a Clue About the 'Curse of Oak Island' Money Pit

A recent discovery on the season 8 premiere of the History Channel series The Curse of Oak Island could provide a significant clue to what's hidden on the island. So what’s the discovery?

→ Read more at menshealth.com
Coin Collectors News
news.coinsblog.ws
No news this week.
If you like what you read, share, and show your support