It is the time of the year where we look for stocking stuffers for our numismatic friends and relatives. Although there are a lot of coins to choose from, I was looking for some other ideas. 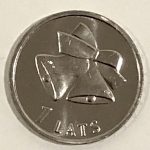 In keeping with the holiday themes, I looked for a coin to give someone that spoke of the holiday. After searching for a simple stocking stuffer, I settled on a 2012 Latvia One Lat coin with Christmas bells on the reverse. I chose this coin because I previously purchased the 2009 Latvia One Lat coin with a Christmas tree on the reverse. These were the only two Christmas-themed circulating coins issued by Latvia. 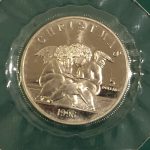 While looking for something interesting, I found a $5 Heavenly Angels coin issued by the Marshall Islands in 1996. The copper-nickel coin comes in a blister pack embedded on a card. Although it is not a current issue, the Christmas theme on a card can add a little spice to a numismatist’s collection.

I needed one more collectible and stumbled over a postcard-like holder, in its envelope and titles Merry Christmas From Around the World. The card contains coins from Mexico, Luxembourg, Columbia, Norway, Austria, Finland, and China. Each coin has Mery Christmas in the native language of each country, including Chinese. They are all base metal coins from 1964 or 1965.

I found the Latvian and Marshal Islands coins on eBay, and I purchased the card from the mid-1960s from a nearby antique shop. Be careful buying foreign coins online. The Latvian coin came from Latvia, and overseas shipping is slower than expected.

If you can find something that the seller can ship on time, you can make a good impression with your favorite numismatist by finding Christmas-themed coins for the holiday.

A Scottsbluff man is hoping a donation to local fire departments will spur others to help out during a tough year.

THE 1955 Lincoln obverse cent is one of the most unique coins in existence and you're very lucky if you happen to have one in your possession. Since 1909, the US Mint has struck cents that feature 16th US President Abraham Lincoln.

The coins were found near Southampton by three amateur detectorists who examined the field after carrying out research on Google Earth.

→ Read more at bbc.com
Treasure hunter still in jail after 6 years for refusing to disclose whereabouts of 500 gold coins found in historic shipwreck

A former deep-sea treasure hunter is preparing to mark his sixth year in jail for refusing to disclose the whereabouts of 500 missing coins made from gold found in an historic shipwreck.