Have you ever wondered why advertisers repeat a telephone number or web address three times? Research has shown that repeating the takeaway information three times is enough to get potential buyers to remember. The message I want you to remember is that buying coins from a Facebook ad is not safe.

Nearly every email I receive starts with the writer seeing an ad on Facebook and bought the coins advertised. The coins are always advertised below melt value and up to 75-percent off the published market guides.

A few weeks ago, the Anti-Counterfeiting Educational Foundation (ACEFonline.org) said they are helping an “investor” who bought counterfeit coins based on an ad he saw on Facebook. The investor paid $499 for what he thought would be 50 American Silver Eagles and $499 for an American Gold Eagle.

He is another scammed collector who bought coins from a Facebook ad.

Some legitimate dealers use Facebook to promote their stores. There are Facebook groups dedicated to buying and selling amongst members. These groups are self-policed and have no significant problems. However, we cannot say this about many of Facebook’s advertised content.

How to Identify Legitimate Sellers from the Scammers

Facebook provides clues on how to identify advertisers’ potential legitimacy. First, all advertised content is marked ”Sponsored.” Look below the company’s name; instead of the date, the post is ’Sponsored.’ If it is just a timeline post that the writer stuffed with keywords to game the system and get you to notice the content, it is likely not legitimate.

Look for the check next to the company’s name for Facebook’s verification. A company that has submitted to Facebook’s process for verification is likely safe. For example, the advertisement below for Moden Coin Mart shows a verified company with sponsored content. Modern Coin Mart is a good company with fair prices and will sell a quality product and should not be dismissed because they advertise on Facebook. 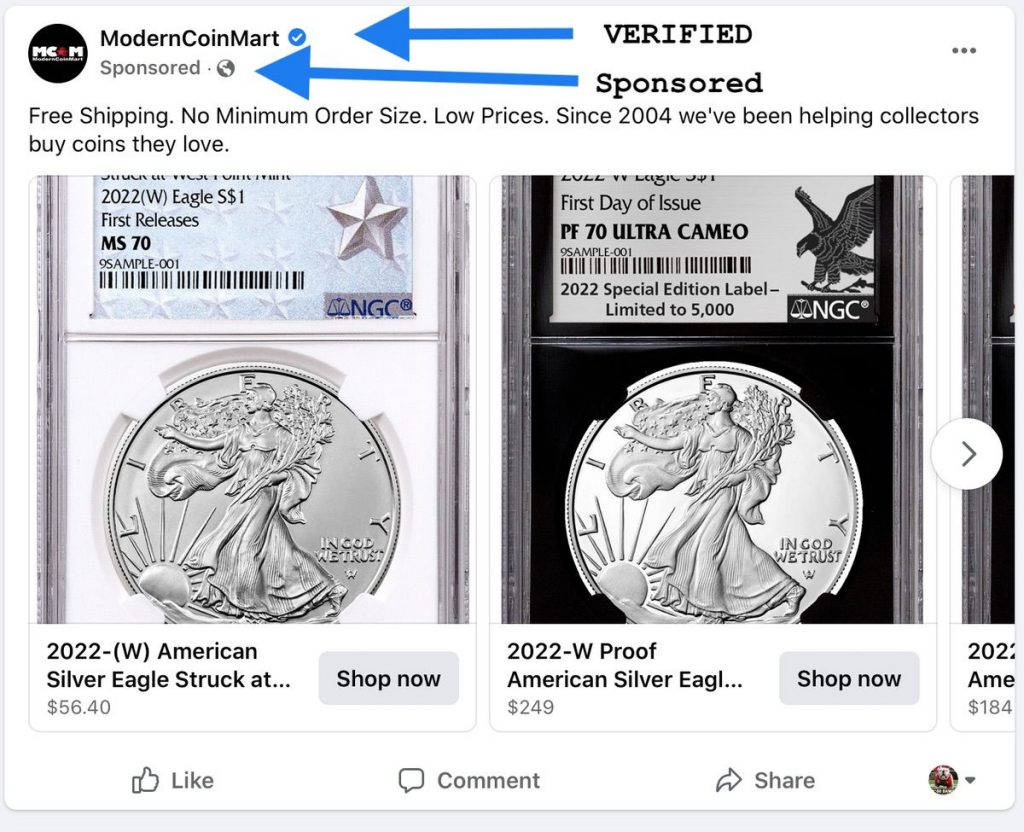 The following is an advertisement from BullionMax. BullionMax has not submitted its company information to Facebook’s verification process and does not show the blue check. But they are a company selling bullion. However, BullionMax is a company in that grey area between having a reputation that could pass a verification process and selling products at a premium price using advertising bordering on deceptive. 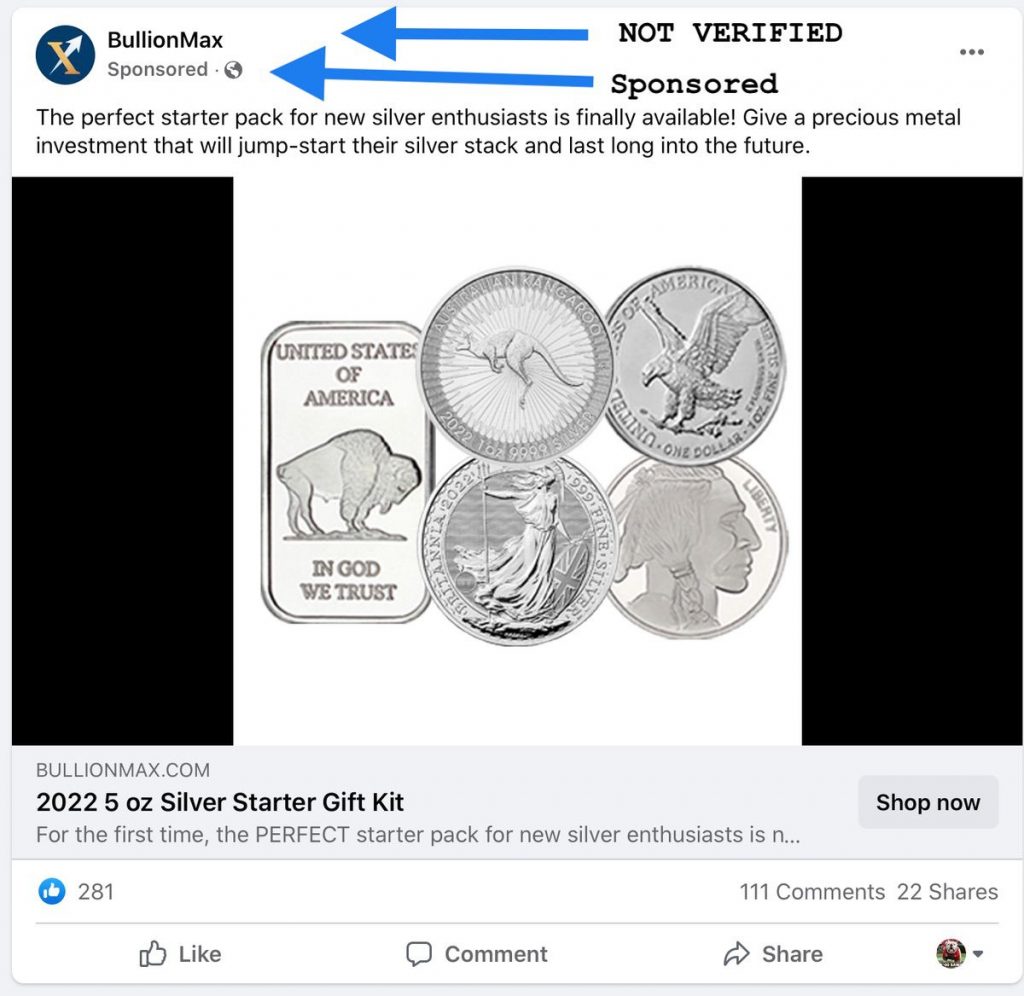 For a sanity check, I will search for the dealers in the Professional Numismatic Guild (png.memberclicks.net/find-a-png-dealer) and the Accredited Precious Metals Dealers (apmddealers.org/apmd-dealers) databases of members. If the dealer is not in either of those directories, I will avoid purchasing from them based on an online advertisement. Modern Coin Mart has employees that are PNG Members, and BullionMax does not.

For the record, I am not affiliated with Modern Coin Mart except as a satisfied customer.

Then you find ads that use the images of shiny coins to get you to click on their site. Sites like this pretend to be search engines but lead you to scam sites, and they get a kickback from the scammers for every click they generate. 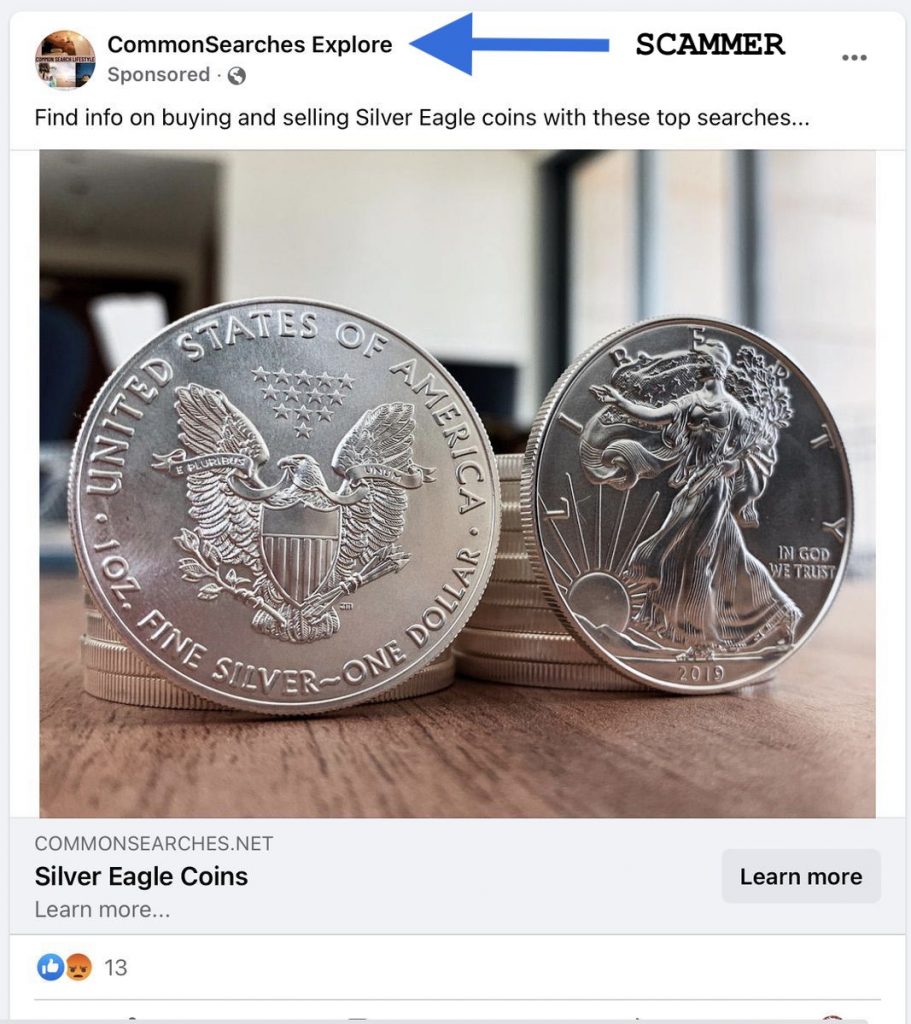 If you see these ads or any other, click on the three-dot menu at the top of the post and select “Report ad” from the pulldown menu. It will send a message to a human at Facebook to inform them that the ad is attempting to scam people.