In the run-up to the World’s Fair of Money, several releases have announced the display of rarities and different collectibles relating to numismatics that will make an appearance. The announcement that excited me was the Brian Hendelson Collection of Presidential Appointment Documents. 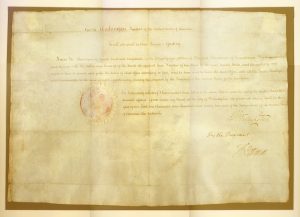 Signed by George Washington as President and Thomas Jefferson as Secretary of State, this 1792 document appointed David Rittenhouse as the first Director of the United States Mint. (Photo courtesy of Brian Hendelson.) 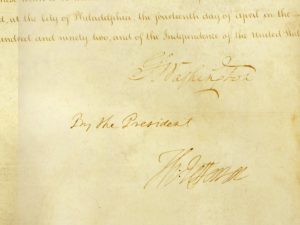 One of the appeals of numismatics is the history coins and documents represent. The documents range from the document of George Washington’s appointing David Rittenhouse as the first Mint Director to President U.S. Grant’s appointment of Chauncy Noteware as Carson City Mint Director.

Historical documents can be as important as the coins because they represent the journey that led to the issuing of the coin. Although collectors would like to collect the 1907 Saint-Gaudens Double Eagle, I find the letters between Augustus Saint-Gaudens and Theodore Roosevelt more fascinating.

Most people will not geek out over historical documents, but I would love to see more original documents relating to numismatics. It would be an exhibition I would find fascinating and keep me off the bourse floor.

Croatia started the production of Croatia euro coins as it gets ready to enter the European Union as a state of the bloc by January 2023.

Known as the "Coin Cabinet of Dresden," this museum houses over 300,000 currency-related artifacts.

Curator, National Numismatic Collection Before the February 2022 Russian invasion of Ukraine, few outside of the country took note of the trident symbol at the center of Ukraine’s national emblem. But in the days following the invasion, the trident was beamed around the world, appearing in the backdrops at press conferences and embossed on the clothing worn by the nation’s leaders and soldiers.