Proof Eagles Have Been Grounded

What We Should Have Learned
In an analysis posted here last April, production totals for 2008 showed that the US Mint experienced an extraordinary increase in demand for American Silver Eagle bullion coins striking over 20 million ounces of silver for the first time. This was a 128-percent increase over the 2007 production and almost twice as large as 2006, the second highest production total.

Gold production totals revealed a different story. There was an unprecedented demand in 1998-1999 where the number of American Gold Eagle coins and the ounces of gold used has not been matched by the US Mint. In addition to striking over 5 million coins using over 2 million ounces of gold, the US Mint also struck over 4.4 million 50 State Quarters in the program’s first year of issue. The production of 1.1 million coins using 788,500 ounces of gold was only a bit above average but the most in the 21st century.

Since the start of the current economic crisis that experts say began in December 2007, it was clear that the US Mint was unprepared when investors turned to purchasing American Eagle coins looking for safe investments. In fact, the US Mint admitted that the US Mint knew they were experiencing shortages as early as June 2008. By October, the US Mint had to announce that there is a shortage of bullion because the US Mint could not purchase enough material at market prices to meet the demand. After a year, the US Mint announced that “the United States is lifting the allocation process,” ending the rationing of bullion issues.

Whoever said no news is good news has never met the politicians running the US Mint.

Where We Stand Today
With the announcement by the US Mint, I downloaded the 2009 bullion production totals and added it to the previous analysis to see if there has been an unprecedented demand.

If the demand for silver in 2008 was any indication, it would be matched or exceeded by the demand in 2009. Through the first week in October, the US Mint has struck over 21 million one-ounce American Silver Eagle bullion coins. That is more coins than the 20.5 million struck in 2008. Figure 1 shows that if the trend continues, 2009 will exceed all silver production totals for American Silver Eagle coins. 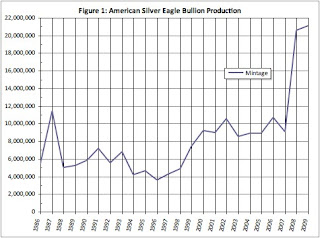 Although there was a dip in the monthly production for September (see Figure 2), trends show that American Silver Eagle coins struck in the fourth quarter (the first quarter of the fiscal year) can outpace production in earlier in the year. It is possible that the US Mint could produce another 10 million silver coins by the end of the year, especially if collectors plan to buy bullion coins to fill in the whole made by the 2009 discontinuance of the proof coin. 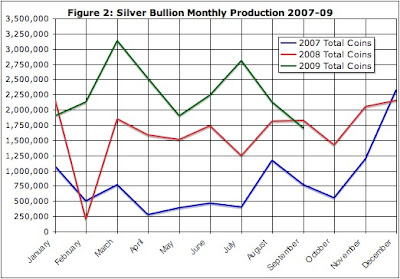 Gold Glitters, But…
Although production for the 2009 American Gold Eagle is outpacing production for 2008, this cannot be said about gold. While gold will surpass last year’s production totals, the US Mint will not produce the amount of coins or strike the amount of gold that they did in 1998 and 1999 (see Figure 3). And while the US Mint may strike more than the 1.3 million coins that marked 1997, they will do so by striking only one-ounce coins. 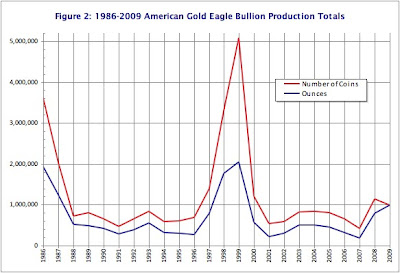 Even with the production increases in 2009, the combined unit production of the gold and silver American Eagle coins will be less than it was a decade ago.

So What Is The Mint Doing?
At the end of April, it was reported that US Mint ceased production of nickels and dimes that would last for six months because of the reduced demand from the Federal Reserve. They continued the production of other coins with changing designs, such as the Bicentennial Lincoln Cent, DC & Territories Quarters, and Presidential Dollars. Recent reports show that the US Mint has not continued striking nickels and dimes while producing fewer quarters than any series since the start of the 50 States Quarter program began in 1999.

The Philadelphia Mint has also ceased production of Kennedy Half Dollars. In fact, Denver has out produced Philadelphia by 26.5 million coins.

As part of the announcement of the temporary cessation of production, the US Mint said that workers will participate in a six-month productivity maintenance program and capital maintenance in order to keep the rank-and-file workers employed.

According to the US Mint’s Annual Reports, American Eagle coins are struck at both Philadelphia and West Point. Bullion issues do not include mint marks making it difficult for collectors to determine where the coins were struck.

If there are idle coin presses at the Philadelphia Mint and employees not working on the production of business strikes, why has management not allocated the appropriate resources to meet the demand for bullion as well as the demand for collector American Eagle coins?

Between 1998 and 2001, the US Mint was running at full production including the new 50 State Quarters and was able to meet the bullion and collector demand for American Eagle coins. In fact, between the two years, the US Mint was producing half-dollars for regular circulation and changed the production of dollars from the Susan B. Anthony dollars to the Sacagawea design. Even with the economic slowdown, the US Mint produced a record number of coins in 2001.

With coin presses silent and the lack of sell outs for this year’s commemorative coins, why can’t the US Mint keep up with the investor and collector demand for American Eagles?

It Does Not Make Sense
Even though there was a coin shortage in the mid-1960s, production at the US Mint exceeds what it is today. In order to find production totals as low as they are this year, we would have to look over 50 years ago when the Philadelphia Mint was in its third building and only producing five types of coins with no commemoratives.

Today, the Philadelphia Mint is in a larger building with more state of the art equipment. The same facility that helped produce record numbers of coins less than ten years ago while striking bullion that included platinum American Eagle coins.

The only answer is the incompetence of the US Mint’s management.

It is very clear that the leadership of Director Edmund Moy and Deputy Director Andrew Brunhart must be questioned. Moy was a patronage appointee who has no experience managing a manufacturing operation or in any other type of position where workflow and resource management is critical. Brunhart, who was hired for his “expertise in organizational change,” appears to be changing the US Mint the same way he changed the Washington Suburban Sanitary Commission (WSSC), for the worse.

I know that the country has issues that may be more important than who is running the US Mint. But the US Mint is a profit center for the federal government and those profits (seignorage) are being hurt by its leadership’s inability to manage its resources properly. Therefore, it is time that President Obama set aside a few moments to replace these political hacks before they destroy one of America’s oldest bureau.

Will You Help?
If you are a collector, investor, or have an interest in seeing the US Mint successfully carry out its mission, I ask that you write a letter (addressed to 1600 Pennsylvania Ave NW, Washington, DC 20500-0001), send an email, or go to the White House website contact form and tell President Obama that Director Moy and Deputy Director Brunhart are damaging this venerable institution.

Hopefully, we can convince the President to act now before US Mint management tries something insipid, like blame collectors for their problems as they tried to do in the mid-1960s.