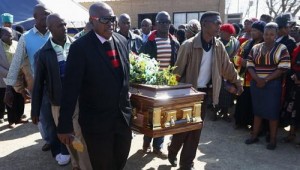 Mourners carry the casket of Andries Motlapula Ntsenyeho, one of the 34 striking platinum mineworkers shot dead at Lonmin’s Marikana mine, at his home town of Sasolburg in South Africa’s Free State province on Sept 1, 2012.

Unrest continues in the South African mining communities as the South African National Prosecuting Authority as dropped murder charges against the 270 miners arrested on Thursday for the August 16 police shootings at the Lonmin Marikana mine.

“The murder charge against the current 270 suspects, which was provisional anyway, will be formally withdrawn provisionally in court on their next court appearance,” acting national director of prosecutions Nomgcobo Jibo told a news conference.

The move to drop the charges occurred as funerals are being held for those killed during the strike.

Unrest continues in Marikana and other South African mining towns as police are being investigated after admitting to firing on striking mineworkers. Some of those officers are on administrative leave but no arrests have been made. This has put pressure on current president Jacob Zuma, who is seeking re-election this December.

Lonmin is the world’s third largest producer of platinum accounting for 12-percent of the world’s production. Lonmin’s primary market is the use of platinum in catalytic converters in cars.

The Marikana mine has been closed since the massacre and was set to re-open after this weekend’s funerals. There has been no report as to whether the wildcat sympathy strike at the KDC East mine owned by Gold Fields will allow that mine to open.

Weak demand has pushed down the market price of platinum leaving mining operators slimmer margins as costs have been rising. The price of platinum has risen only 8.3-percent ($117.00) since August 16, but only up 7.8-percent in 2012.

Gold closed at $1648.50 in London on Friday, down $17 from Thursday (0.7-percent). The price of gold closed at $1691.60 on the New York market, rising after Federal Reserve Chairman Ben Bernanke hinted that the Fed could introduce a “fresh, unconventional U.S. monetary policy stimulus will be implemented at some point.”

There have been no reports from market analysts as to how the South African unrest will effect metals prices.

Image courtesy of Reuters via The Sunday Times of Singapore