Can you really invest in coins?

I always welcome email from readers and the curious but I received an email with an interesting question. My correspondent had become interested coin collecting as an investment and wanted to know if I knew where to find out how much the gold coins would be worth in 10 or 20 years. Channeling my inner Edward Moore (from his play The Gamester) or Dr. McCoy for the Star Trek fans, I replied “If anyone knew the answer to that question they would rich beyond the dreams of avarice!”

This is not the first time someone asked me what I thought would be the price of rare or gold coins in the future. It is also a question that I do not like to answer since I am a collector and not an investor.

Markets are difficult to predict. Even the experts get it wrong. For example, a simple Internet search will find articles that appeared in MarketWatch, Reuters, and The Guardian from the United Kingdom predicting $2000 per ounce prices for gold. In March, the financial site The Motley Fool had an article saying that gold could hit $2000 per ounce next year.

Trying to read the financial tea leaves has long been a sport for the financial pundits. One pundit writing for Forbes noted that the dollar strengthened while gold and crude oil dropped while last week, another pundit from Bloomberg wrote that stocks and gold rose as the dollar falls on the reaction earnings that have been topping estimates and the prediction of slower economic growth predicted by the Federal Reserve saying it will maintain its stimulus program. In between, an analyst at Yahoo Finance was predicting “a major turnaround in the US Dollar versus the Euro, but gold prices may actually outperform versus the Greenback.”

Predicting the price of gold and rare coins can be a similar test of ones nerves. One interesting way to look at the market is to see what the PCGS3000 Index says. The PCGS3000 index uses a sampling of collector coins, type coins, varieties, and differing grades to create a market index. Their sample are considered classic coins (1792-1964) including gold and early commemoratives to total 3000 coins.

Does this mean gold and rare coins are not a good investment? If you bough during the run up in value in 2008, you are behind. However, coins purchased from the beginning of the ten-year chart should yield a better return for investors.

PCGS Generic Coin Index for the past year

While you are thinking that this may be particular to gold coins, investors in 20th Century Coins (see chart below on the left) and Morgan and Peace Dollars (below, right) may be scratching their heads looking for a better return.

PCGS Morgan and Peace Dollar Index for the last 10 years

PCGS 20th Century Coin Index may indicate that coins from our recent past may not be a good investment.

As a layman, what appears to be a hot market is the very high end market. These are the extremely rare coins, coins with extraordinary pedigrees, and unique collectibles. Not every collector or investor is going to be able to own a 1794 Flowing Hair dollar that sold for $10 million last January, the George Walton 1913 Liberty Head Nickel, or a 1880 Coiled Hair Stella which is really a pattern that sold for $2.5 million in September. Even rare copper coins are selling at a premium. 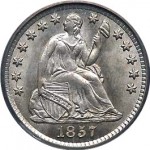 The mantra of investing is to buy low and sell high. The problem is knowing what to buy. By the time someone figures out what is the best investment, the prices are going up and the investor value is lost. Along with knowing the coins and their value, timing is everything. For example, is now the time to look at what are sometimes called exotic U.S. coins? Exotic coins are those produced before the 1870s like the Bust and Liberty Seated coins, Trade dollar, and even the rare two- and three-cent coins. Many of these coins are overlooked by a lot of people, including collectors, sometimes because of cost other times because they are not as readily available.

Predicting the coin market is more difficult than stocks and commodities. With the capital markets there is company performance data, yield of crops, world conditions, and a lot of measurable factors that the professionals use. None of that exists in the coin investing market. Prices can be predicted by rarity to a certain degree, much of the pricing appears to be based on emotion: what will you pay for the coin. For instance, if the 1794 Flowing Hair dollar sold for $10 million what would the only legal-to-own 1933 Saint Gaudens Double Eagle sell for today? It used to hold the record for the most ever paid for a single coin when it sold at auction for $7,590,020 (including buyers premium and the $20 that was required to monetize the coin) in 2002.

If you are interested in trying to test this market, I wish you well. I am a coin collector not an investor. I do not think that will change. However, if you are looking for an interesting investment market, I hear the market for classic cars, including the muscle cars of the 1960s and 1970s are an affordable and growing market. And if you do not want to enter that market for investment, at least you can consider an emotional purchase—like I did! 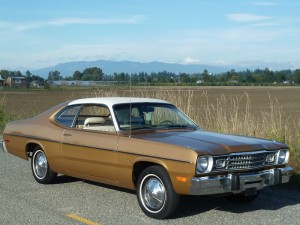 This 1974 Plymouth Gold Duster with a 225 Slant 6 is a memory that is on a truck on its way to is new home in my garage!

Gold charts are courtesy of Kitco
The coin market charts are all from PCGS and their PCGS3000® index.
Half Dime image from Wikipedia.