The ANA gets it but does Whitman?

In letter to the editor that will appear in the February 10, 2014 edition of Coin World (now available online), Dennis Tucker writes that the target of the American Numismatic Association website rebuild and acknowledging “’Young Numismatists are the future of the hobby’ are slogans to murmur approvingly, without logical reasoning.” He goes on to give his view of the market to target without recognizing facts of market forces.

Tucker, whose business is selling physical books, or what I would call “dead tree editions,” opines that it would be wiser and more productive to target those in the 50 and 60 year old demographic than 10 and 20 year olds. It is obvious that Tucker is looking at the issue from the spectrum of the business he is responsible for rather than the real future.

One problem with Tucker’s argument is similar to those in many other hobbies that rely on the collecting of physical objects: if the hobby cannot be translated to the younger demographic then the future of the hobby will be lost. As the final wave of the baby boomer generation celebrates their 50th birthday this year, empty chairs are becoming more prominent at meetings with fewer standing there to fill those chairs. There seems to be a smaller pool of people ready to join even though the population in the demographic that Tucker wants to target has grown.

Another problem with his argument is that it does not address how to reach this or any other demographic. Based on his company’s business model and his letter, Tucker is implying that even his target demographic is not using technology and cannot be reached using technology. Unfortunately, that flies in the face of researched facts. 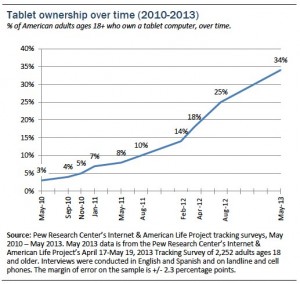 Pew Internet and Lifestyle Study: For the first time, a third of American adults own tablet computers

One way to judge the acceptance and usage of technology is to look at the most cutting edge device and see who are its users. In 2013, the device still on the cutting edge is the tablet. Whether it is the iPad, Kindle, Nook, or any number of other manufacturer’s device, the tablet can be considered one of the most disruptive advances because it disrupts markets in so many areas. Tablets have created new markets for services as well as forced others, like traditional newspapers and magazines, to change the way they do business.

Using tablets as a barometer, we can look at the “Tablet Ownership 2013” report from the Pew Internet and American Life Project. In their study, Pew reports that through May 2013, tablet ownership has grown from May 2010, one month after the iPad’s introduction, the number of tablet users have increased from 3-percent to 34-percent. That is more than an 1100-percent increase in three years!

Further, Pew’s research found that the demographic with the most significant ownership are the age group of 45-54 with 38-percent ownership and 35-44 with 49-percent. The first is part of the market that Tucker wants to target while the latter is the market that should be next. 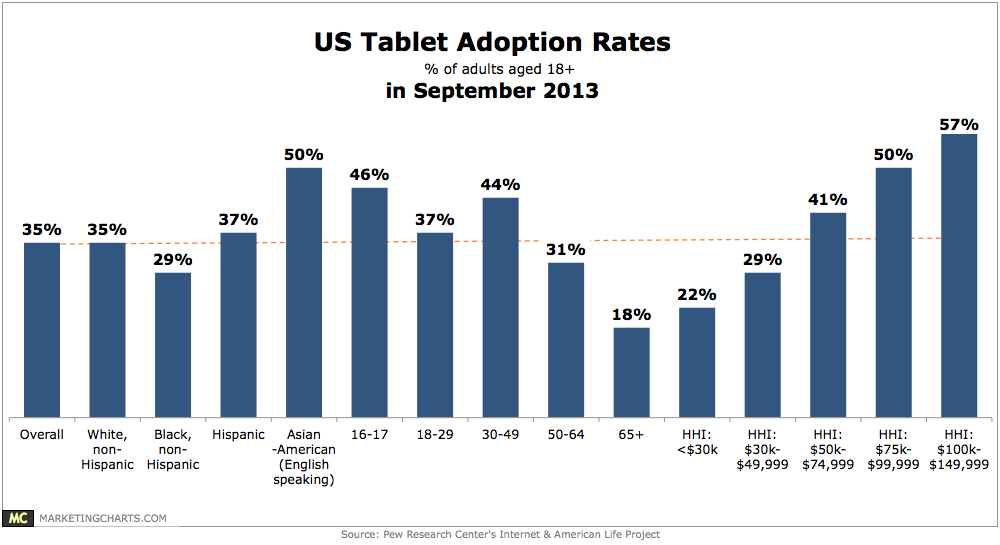 US Tablet Owner Demographics as of September 2013 (courtesy of marketcharts.com)

Pew’s research also looked at tablet ownership by income and found that 56-percent of adults that own tablets earn $75,000 or more per year. If Tucker’s goal is to target those with disposable income, just look at one of the fastest growing area of technology to understand where the markets are going.

Another study recently release by Pew notes that e-book readership has grown as the sales of e-readers have risen. While the study does not say people have not completely replaced their dead tree versions with electronic editions, there is anecdotal evidence that if more titles were available electronically, those with e-readers would take advantage of that.

In a broader look at the emerging online world, Pew Research provides trend data that shows that more people are using the technology in their daily lives. Not only are more than 60-percent of the 50-64 year old demographic using the Internet and associated technologies a large numbers, but e-reader ownership is increasing. It is also increasing in the younger demographics, including those in the 30-49 year old range who would be Tucker’s next generation of customers.

The ANA, like any business, has to adapt to new markets or they lose their relevancy. It is not enough to say to target one group over the other but you have to target the markets where they are moving. Even if the business is concentrated in one market, it has to adapt and diversify within its market or it becomes irrelevant. As a stark example, you can look at the downfall of Blackberry. Once the king of the smartphone, Blackberry, once called the Crackberry because its users were addicted to it like a crack addict was addicted to crack-cocaine, went from the most popular phone to the least popular phone because they ignored the trend set first by Apple then by Google’s Android.

Borders, a one-time success story, did not adapt to the changing market and paid for that failure.

History shows how significant technologies disrupt markets and those that do not adapt go the way of the buggy whip, blacksmith, telegraph, Kodachrome film, and the Motorola DynaTAC phone. If the ANA cannot reinvent itself by adapting technology to what its potential members are doing, the ANA will go the way of Blockbuster, Polaroid, and Borders Books.

Whitman and Tucker could help the ANA by looking at this future and target their books to this growing demographic. While the quality of Whitman’s books have improved, the companies selling tablets and e-readers are reporting increased sales of their products and an increased sales of content for those products.

Amazon is betting a lot on the tablet and e-reader market. They sell the Kindle nearly at their cost in order to lure customers into their dedicated markets. Amazon hopes to sell you a Kindle so that you buy their e-content which they make money by transferring bits. Not only has Amazon built in the infrastructure to transfer bits of information, but they are selling it as a service to others in order to reach the same markets. Amazon is betting that once you are in their market, they can sell you these bits, which are cheaper to store, package, and ship than dead tree edition books.

While the e-book market is growing, Whitman and other hobby publications are dipping their proverbial toes in this market. Although Whitman does offer a number of its books in e-reader format, they do not market that fact nor do they do any outreach in order to build that market. It is as if they publish this content so that when the topic comes up they could say that they do have e-books. They are checking the box, so to speak.

With its premier content, Whitman should be out front of the numismatic market for e-publishing. Tucker and his marketing department should be standing on the proverbial street corner marketing their e-book offerings. This will not only help the hobby but his own company by reaching out to the demographic that the ANA is targeting: the connected numismatist.

Growing the ANA is like growing a business; you have to look at what your target market’s demographics are and figure out how to reach them. For hobbies like numismatics, the new target is online where the current generation is moving and where the next few generations will be. Not adapting to those new markets can make both the ANA and Whitman as relevant as the Betamax and go the way of Woolworth’s or Pets.com.

I am glad the ANA is doing something to expand its market.