Yes, the law allows the U.S. Mint to do it 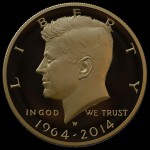 It has been an ongoing theme written on this blog, the latest was about the nonsensical $1 Trillion coin, is that all you have to do to understand what the U.S. Mint can and cannot do is clearly documented in Title 31, Section 5112 of the United States Code (31 U.S.C. § 5112), Denominations, specifications, and design of coins.

You can read Section 5112 without having to obtain a law degree. It is very readable. It is the section that covers all of the specification for every coin struck by the Mint. It describes the size, weight, content, and the design of the coin. Very little is left up to the Mint in coinage design. But as the U.S. Mint is run by fallible humans, these laws were written by even more fallible humans: congress. This means that some of the laws are very clear while others are open to some interpretation.

First, it has been questioned whether the U.S. Mint can strike more 2014 National Baseball Hall of Fame commemorative coins since they sold out of the gold and silver coins. The answer to that question can be found in law (31 U.S.C. § 5112(m)). This is the section that describes the legal requirements for commemorative coins. Paragraph (2)(B) (31 U.S.C. § 5112(m)(2)(B)) says (emphasis mine):

2014 National Baseball Hall of Fame commemorative silver dollars and gold commemoratives are sold out at the U.S. Mint.

Since subparagraph (A) codifies the limits of commemorative programs, and if the mintage levels are not adequate to meet public demand, then the Secretary can authorize high limits for the commemorative coin program.

As was the case with the 2005 Marine Corps Commemorative Silver Dollar, a quick sellout of the coins does satisfy the evidence necessary for the Secretary to make the decision to increase the production limits. In 2005, then Secretary of the Treasury John W. Snow authorized the U.S. Mint to produce 100,000 additional silver dollars. This was the last commemorative program sellout prior to the Hall of Fame coins.

However, the proposal to increase the production of the National Baseball Hall of Fame coins is speculation. This rumor has not been acknowledged by the U.S. Mint or the Department of the Treasury.

The other claim is that it is illegal or questionable that the U.S. Mint can produce the 2014 Kennedy Half Dollar gold coin. In an op-ed printed in Coin World, William T. Gibbs wrote, “The Mint is using what it cites as existing authority to produce a .9999 fine gold half dollar struck at the West Point Mint, with a 1964–2014 dual date and the higher relief 1964 portrait. The logic behind this coin is hard to understand. We’ve never had a gold half dollar before and the Mint’s legal authority to issue it is open to debate.”

Equating the fact that the U.S. Mint has never produced a gold half dollar coin is a parochial discussion and not whether the U.S. Mint can legally produce the coin. After all, the U.S. Mint produces quarter dollars made of five ounces of silver.

Congress makes the laws and they can change at almost any time!

The U.S. Mint is allowed to mint the coin under the authority of 31 U.S.C. § 5112(q), the law that authorizes the Gold Buffalo bullion coin. According to the law, the U.S. Mint is only required to produce the coin with the James Earl Fraser Type 1 Buffalo design the first year. Any changes in subsequent years must then be vetted by the Citizens Coinage Advisory Committee and U.S. Commission of Fine Arts.

The same questions were raised when the U.S. Mint issued the 2009 Ultra High Relief Double Eagle Gold Coin. The coin was based on the 1907 design by Augustus Saint-Gaudens was produced in .9999 fine gold and was issued under the Gold Bullion Coins provision of the law (31 U.S.C. § 5112(q)).

Gibbs further says, “When the Mint struck gold versions of the 2000 Sacagawea dollar and announced plans to sell them to the public, Congress stopped the Mint, stating that Mint officials lacked constitutional authority to issue the dollar coin in gold” as an additional argument against the U.S. Mint producing the Kennedy gold coin. In 2000, the law authorizing the U.S. Mint to strike 24-karat coins did not exit. The Buffalo Gold Bullion coin program that the decision is based was signed into law on December 22, 2005 as part of the Presidential $1 Coin Act of 2005 (Public Law 109–145 [PDF]).

The U.S. Mint may not be the most perfect agency and you may not like their decisions, but to accuse them of questionable legal practices is a bit naive.