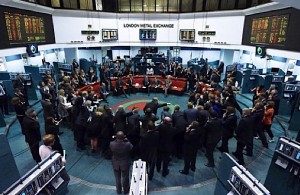 Friday was an important day for bullion buyers and buyers of collector coins whose prices are strongly tied to the price of gold. It was the day that the London Bullion Market Association (LBMA) launched its new electronic-based gold benchmark system, London Gold Price, replacing the century old London Gold Fix. It ends an era when the bullion traders and refiners created a market to set the price in 1919. From the beginning, the market was hosted by Nathan Mayer Rothschild & Sons by the members of The London Gold Market Fixing Ltd. The market was moved to Barclays when NM Rothschild exited the bullion market in 2004.

The move to an electronic system followed the revelation that in June 2012 an employee of Barclays Bank manipulated the gold fixing process. Unfortunately, it was not an isolated incident. When Barclays was investigated, it was revealed that there were such system and control failures that members of the bank had been manipulating gold prices since they started hosting the market. In May 2014, the Financial Control Authority, the British equivalent Commodity Futures Trading Commission, fined Barclays £26 million for not properly managing the market.

What made the old system susceptible to manipulation was that it was still widely a human controlled process with bidding arbitrarily controlled behind then scenes. Even as the market moved toward a more technological approach, it was as if the technology was being used as the proxy with a human still doing the arbitration. Think of it as if the computers would provide the bidding but there was still an human auctioneer managing the bids.

The new market is electronically run and monitored in cooperation with the LBMA. Rather than a single source being responsible for all of the benchmark prices, the LBMA Gold price auctions are held twice daily by the ICE Benchmark Administration (IBA) at 10:30 AM and 3:00 PM London time in U.S. dollars. IBA is an independent subsidiary of the Intercontinental Exchange (ICE) responsible for the end-to-end administration of benchmark prices. They do not buy or sell commodities but manage the transactions and setting rates based on market forces.

To further diversify the market, the LBMA Silver price auction is operated by the CME Group, a Chicago-based market maker, and administered by Thompson Reuters. The London Metals Exchange administers the platinum and palladium price market. Silver auctions are held once per day at noon London time.

Proponents of the new market system touts its stronger oversight and detailed audit trail capabilities to support the new regulations as making this market more trustworthy than the previous system. Detractors wonder if the new electronic system could create market inequities that was seen in U.S. markets with programmed trading.

News reports suggest that the new market operated without problems on its opening day. In fact, the market saw a rise in all metals by the afternoon auction.

Snapshot of the bullion market on March 20, 2015 (static image, will not update)

Since the U.S. Mint sets its price based on the London market, they sent the following note to Authorized Purchases of bullion products on March 18, 2015:

This is to inform you that on Friday, March 20, 2015 the U.S. Mint will start using the LBMA Gold Price (PM) to price and settle all of its gold bullion coin orders. The new gold price replaces the London Gold Fix and will be managed by the ICE Benchmark Administration (IBA). We do not anticipate any transition issues. Moving forward all gold bullion transactions with the United States Mint will utilize the new LBMA Gold Price (PM) in place of the (PM) London Gold Fix.

While the move will make the markets more transparent and possibly open it to more participants, it is uncertain how this will affect the price of metals in the long term. For that, my crystal ball does not compute!