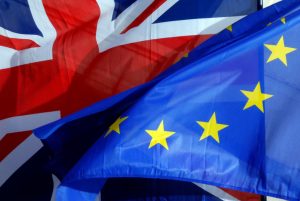 Brexit reminds my of The Clash’s song “Should I Stay Or Should I Go?”

While there is enough going on with U.S. politics to make one’s head spin, on Thursday, June 23 the United Kingdom will hold a nationwide vote on whether the U.K. should leave the European Union. The last time the U.K. held a referendum on joining the E.U. was in 1975, which predates the modern European Union. It is called “Brexit,” a portmanteau of the term “Britain Exit,” as in should Britain exit the E.U.?

The European Union was formed after World War II in various forms in an attempt to collectively rebuild Europe by integrating their resources. The first formal attempt was the Treaty of Rome in 1957 signed by Belgium, France, Italy, Luxembourg, the Netherlands and West Germany to create the European Economic Community (EEC) and established a customs union. What we know today as the European Union was established when the Maastricht Treaty became effective in 1993.

As part of the integration under the E.U. is the common currency known as the Euro. First distributed in 1999 with 14 participating nations, now includes 19 of the 28 nations plus the Vatican, Monaco, and San Marino who are not formally members of the E.U. The United Kingdom (England, Northern Ireland, Scotland, and Whales) continues to use the pound sterling, sometimes referred to the Great Britain Pound. Ireland, sovereign from the United Kingdom, uses the euro.

The U.K. is holding this vote because Prime Minister David Cameron promised to hold this vote as part of his 2015 campaign. When the Conservative Party won the majority of seats in Parliament, Cameron, as party leader, was elected by Parliament to serve as Prime Minister.

For those of us Yanks who want to learn more, BBC News has published a good overview with links to more in-depth that you can click here to read it, if interested.

So why is this significant for a coin collector’s blog? We do look at economic matters affecting collecting including those whose collection are being put together for speculation including the purchase of bullion-based numismatics. Also, the outcome could not only affect the world economic system but could also have an impact for those who collect foreign coins.

If the U.K. votes to remain in the E.U. then the status quo remains. The British will go back to their partisan politics and scratch their heads over the U.S.’s partisan politics known as the 2016 presidential election. Markets that have tightened in anticipation of what Brexit may mean could see this as a temporary reprieve.

If the U.K. votes to leave the E.U. the markets may not like it and the economy can go into a freefall. Markets do not like uncertainty and a vote for the U.K. to leave the E.U. would bring about the uncertainty of “what happens next?” and “now what?” Business leaders, who are largely in favor of remaining the in E.U., has noted that it makes it easier for them to move money, people and products around the world. What happens when those doors are closed?

As we have seen when economies are uncertain, markets react by selling off speculative assets, like stocks, and running to safer investments like trustworthy bonds and precious metals. In the last three weeks in the run up to Brexit, gold is up $56 (4.6-percent) in the last three weeks and silver is up $1.41 (8.8-percent). Both are off their annual highs set on June 16 when published polls are suggesting that Stay has a lead greater than the margin of error over Leave.

NOTE: Charts do not update 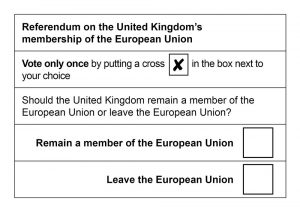 It is likely that world markets will decline and precious metals will go up on Thursday as investors try to figure out how the Brits will vote. Polls close in the U.K. at 2200 GMT, which is 11:00 PM in London and 6:00 PM on the east coast of the United States. There are 382 polling districts throughout the country. Each district is counted and forwarded to one of 12 regional centers. Once the regional center verifies the counts it will be forwarded to a chief counting officer that will announce the results at Manchester Town Hall. BBC suggests that results should be reported starting at 4:00 AM or 11:00 PM on the U.S. east coast.

Market watchers can watch what happens to the Tokyo Nikkei 225 market index and Hong Kong’s Hang Seng Index. Both are the major indexes in the Asia/Pacific region and will be around their midday trading sessions on Friday.

Collectors looking for something numismatic to add to their collection might want to consider the In/Out UK EU Referendum Medallion produced by Chard(1964), a British metals dealer. These copper medals were produced for the Britons who were undecided. Flip the medal before you vote to decide whether to remain or leave. The Remain side has the E.U. flag surrounded by “Remain,” “Better Together,” “United,” and “Stronger in Europe.” The Leave side has the British Union Jack with “Brexit,” “Independence,” “Leave,” and “Sovereignty.”

Medals are 31mm in diameter and weighs 14 grams. They come in pure copper or Abyssinian Gold, a type of brass made of 90-percent copper and 10-percent zinc that has a gold-like color. They can be purchased for £2.95 each ($4.33 at the current exchange rate) plus shipping (estimated at £6.00 or $8.80) directly from Chard’s website. 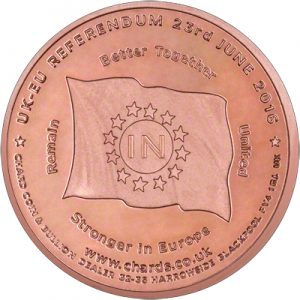 Chard Brexit Medal “In” side 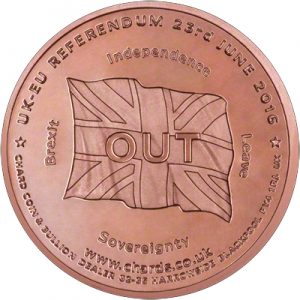 Chard Brexit Medal “Out” side