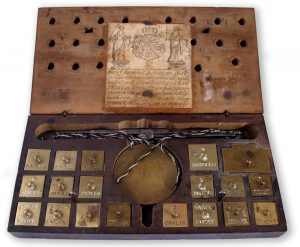 Like your visual inspection, checking a coin’s weight is not a definitive answer as to weather a coin is genuine or not, but it can be an indicator. In order to check a coin’s weight, you should use a scale that measures weight in grams and is accurate to 1/100th of a gram. If you have a scale accurate to one-tenth of a gram, you can still use the scale, but be careful with the conclusions you come up with.

You will also need an authoritative reference that lists the weight of the coin you are weighing.

Weigh the coin. If you put anything on the scale other than the coin, such as a lint-free cloth to protect the coin, make sure you zero-out the scale before weighing the coin—called setting the tare. Your coin should be no more than one percent heavier than its reference weight and no lighter than 2-3 percent lighter for wear.

While the U.S. Mint has tried to be precise in making their coins, early attempts have been less than perfect. I have seen genuine circulated Large cents that have been heavier than the reference weight. Also, it is difficult to know how much of the coin is really worn. A coin that is too light may be a sign that the coin is made of a lighter metal, indicating a counterfeit.

Measure the Diameter and Thickness 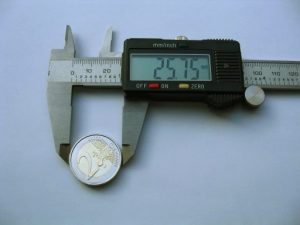 Measuring the coin can be one test to tell if it is genuine. The best tool to use to measure a coin is a caliper rule. A caliper has hinged legs and looks a bit like the compass you might have used in high school to draw precise circles. A caliper rule slides and has a jaw on one end where to place the coin. Most of the time, both types are called just calipers however, the caliper rule is easier to read and handle for measuring coins.

Caliper rules can either be made using a mechanical dial or a digital readout with the rule marked to use a visual inspection. I prefer using a digital caliper that is accurate to at least one-tenth of a millimeter.

When you consult a reference to find the dimensions of a coin, you will find that most of the dimensions are in millimeters. It is very important that you remember this and use this scale when performing your own measurements.

To measure the diameter of the coin, hold the coin in your hand—wearing a cotton glove is optional—and make sure the claw end of the caliper fits snugly on the widest area of the coin. Once the measurement is set, you can read the measurement on the dial or digital display.

Do the same thing to measure the thickness.

A genuine coin will be within one percent of the diameter and the thickness will be 1-2 percent of the documented thickness depending on wear. However, this may not be a good test for early copper coins—Large cents and half cents. While congress and the U.S. Mint set standards for these coins, the lack of domestic suppliers forced them to have to buy the blanks from companies in England. Although specifications were provided, suppliers did not follow those standards properly. Many blanks were more like the British penny than based on the U.S. standard. You may find that some early large and half cents are larger in diameter or thicker than the information you find in some references.

Remember, wear and minting conditions can cause variations in these dimensions. It should be one part of the over all assessment.

Counterfeiting technology has improved to where the counterfeiters are not using steel. Since there may be older counterfeits available on the market, this is a good test to find them.

Although the tests that are being discussed are nondestructive, for lesser coins or bullion, another test that can be used for silver coins is the magnetic slide test. The slide test can scratch your coin and is not recommended for those expensive collectibles.

The slide test uses a small slide that sits at a 45-degree angle from your surface and is made from a rare-earth magnet. Place the coin at the top of the slide and let if fall. If it is a genuine silver coin, it will slowly fall down the slide as if there was resistance. A counterfeit coin made without silver or that may be silver plated will either freely fall down the slide or slow slightly. If the coin is made of a magnetic metal, it will stick to the slide.

Neodymium magnets are popular choices for all sorts of projects including those that use diamagnetic metals to show an object floating over a surface.

One problem with the slide test is that copper is also a diamagnetic metal. While copper’s diamagnetic properties are not as strong as silver’s, a silver-plated copper coin can fool the slide test. A test that shows the expected behavior but is not correct is called a false positive result.

I remember when I was young and I learned how to rub the lip of a crystal drinking glass to make it sing. I also learned that this only worked for crystal and not the drinking glasses we used every day. It was amazing to try filling glasses with different amounts of water to make different sounds. Then I became discouraged when I saw someone play music using many crystal glasses on a variety show.

Gold and silver coins make a distinctive ring when struck. Wearing a cotton glove, balance the coin on the tip of your finger and strike it with a similar coin and listen to the ring. Wearing a glove prevents the oils on your finger from damaging the coin and prevents your skin from dulling the sound. Compare what you hear using a similar coin of the same type and similar wear. Sometimes this is called the “ping test.”

Of course conditions can change the sound, but if the sounds were drastically different, it would be a reason to question the coin’s authenticity. If this test is another failure amongst all of the others you conducted, you likely found a counterfeit coin.

In the next installment, we discuss a more complicated test called measuring for specific gravity.