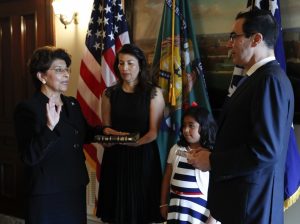 Through the din of Washington, it was lightly reported that Jovita Carranza was sworn in as the 44th Treasurer of the United States on June 19, 2017, by Secretary of the Treasury Steven Mnuchin. Joining Carranza at the ceremony was her daughter Klaudene Carranza and goddaughter Lily Hobbs.

Carranza will oversee the Bureau of Engraving and Printing and U.S. Mint. Since there have been problems reported with Cabinet secretaries getting senior officials to be accepted by the head of the presidential personnel office, the current structure at the U.S. Mint will stay in place. Carranza will take an active role overseeing the mint until a director is appointed.