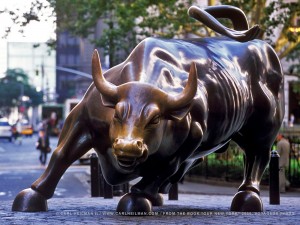 Charging Bull by Arturo DiModica is a bronze sculpture that stands in Bowling Green Park just south of the Financial District in lower Manhattan.

In my nearly 12 years of writing this blog and occasionally delving into the reasons for the fluctuating prices of precious metals and their impact on the numismatic market, there have been some fundamentals that have driven that market.

As I was reminded in one of the articles in today’s list, “Is Now The Time To Buy Gold?” predicting the price of gold is as easy as tracking the U.S. dollar and the stock markets. If the dollar weakens or the markets show insecurity, then the price of gold rises. What makes this tricky is that this is an either/or proposition that makes the theory sound easier than it is.

Simply, gold investing is used as a hedge against weakening currencies. If the currency loses its purchasing power, the price of gold rises. When stocks lose their asset values and are not providing returns to investors, currency may be strong but its buying power is not what it used to be, also known as inflation, then gold becomes a safe bet.

Silver is sometimes referred to as the “poor man’s investment” because of its lower price.

The tricky part is trying to predict what the markets are going to do. This is why when something happens that creates uncertainty, the markets react like a scared dog in a thunderstorm (one of my dogs becomes a basket case during thunderstorms).

The biggest problem is that uncertainty can come as quickly as a Tweet. It is amazing how one statement in 140-characters or less could move all of these markets. It is the business version of being scared of their own shadow.

For now, I am just going to stick to collecting coins. Aside from the satisfaction of the chase and accomplishment, my collection is worth more than what I paid. It is more fun and I know that when it is time to sell, I will make a profit.

IT has been the “hardest secret” that Australian children’s book author Mem Fox has had to keep for a year.

The Royal Canadian Mint has issued a new coin to celebrate a trail that runs through the heart of Saskatoon, along the South Saskatchewan River.

Watch out for these limited edition coins in your change

It&#8217;s a special promotion through one supermarket chain, so you might just end up with these magical $2 coins in your possession.

Roman conquest of Spain written in chemistry of ancient coins

As examples of hubris go, that of Hannibal (the Carthaginian general, not the fictional serial killer) takes some matching. And now German geochemists have added solid science to the evidence of historians and archeologists.

Unusual banknotes, which will be glad to any numismatist.

Interesting money can you bring from journey. Disney dollars are traded one-to-one to the American, the Cuban peso is only for local residents, the coin 25 Euro in almost every country you can find unusual currency. Yes, and the usual money that we pay in the supermarkets, are often a pleasant and even beautiful reminder &hellip;

Is Now the Time to Buy Gold?

With gold climbing to over $1,300 an ounce for the first time this year, should investors consider now the time to buy gold? Or is waiting a better option?

Readers who know not to take wooden nickels are instead advised to hunt for experimental pennies of the 1940s; some pay off big time.

The metal detectorist said he had made some finds which were of archaeological interest but this one was &quot;bling&quot;.

Bob Harwell has turned his childhood pastime of collecting coins into a profession, and now coins he collected are on display at a University of Georgia library. The display includes a complete set…