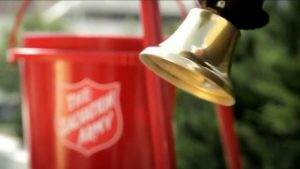 The reason why I search for news about topics related to numismatics from outside the industry allows me to get an understanding of how others see numismatics. I find even the most innocuous story about a country considering redesigning their currency, a find of a coin thousands of years old, and how pocket change finds can lead to high bids on online auctions to be interesting.

I share these with you to inspire your collection and help promote the hobby.

But as I shared a few weeks ago, searching the news also comes with its distractions. The latest happens this time every year when the stories about a gold coin being dropped in those ubiquitous red kettles become prominent.

I am not against giving to charity. On the contrary, I think more people should be charitable with whatever they could give. If time is money then give your time. In fact, I am one of those people who believe that when someone reaches 18 years old they should be required to do two-years of public service. It does not have to be in the military but something to serve the public good.

However, dropping a gold coin into a red kettle may look good as news headlines but can really be more problems than they are worth.

As we know, selling a coin is not the easiest thing to do and when you do, you do not receive its full value. A dealer may raise the bid price of a coin from a charity to provide some charitable assistance, but most dealers are not going to buy the coin at full value—unless they are charitable. And this does not take into consideration the fluctuating price of the metals. Maybe, by the time the charity sells the coin, the market price drops and the coin is not worth as much as the day it was dropped into the kettle.

Rare coins may be more problematic. For the best value, those have to go to auction and as anyone who has sold merchandise in an auction, you never know what the hammer price will be. Selling anything at an auction is risky. While a quality rare coin may bring in more than the coin is worth, it can also do far worse.

Since gold is currently $1288 per ounce and considering that modern bullion coins have about a 15-percent numismatic premium, rather than buy a bullion coin and drop it into a kettle, take the $1481 in cash and drop that instead. You can do what an acquaintance does and wrap a few $100 notes around a $1 note so it looks like you are giving a few dollars. When they open the kettle and see hundreds of dollars in cash, they will be happy and will be able to use it for their work immediately without having to worry about selling the coin.

If you want to donate the proceeds from the sale of a coin to charity, that is wonderful. But sell the coin yourself. You are more qualified than these charities in obtaining value from the sale. Then donate the cash. It should not be about the ego boost from being written about in the newspapers. It should be about helping the charity. Which is more important?

Got a cold? In coin rubbing Indonesians trust

JAKARTA – Coin rubbing is a form of folk medication practised in Indonesia and other Southeast Asian and East Asian countries, such as Laos, Thailand, Cambodia, Vietnam, South Korea and southern China.

(1) View gallery The Queen and Prince Phillip’s platinum wedding anniversary is being commemorated with a new coin, minted in Banstead. The coin is 130mm in diameter, weighs nearly 2kg and is encrusted with 70 diamonds, and the limited run of 70 coins will be hand-finished by the master craftsman at Pobjoy Mint.

New coin to be put in circulation from Wednesday November 22

Coins matter, but go for change

One of my favourite things is my Dad’s old horseshoe wallet where he kept his spare change and a rolled pipe cleaner or two. I used it for years after he died, packing it with British bronze 12-sided threepenny bits and shillings until I arrived in Australia and stuffed it with dollar coins and 50¢ dustbin lids.

Talk about striking gold! Treasure hunter unearths a hoard of 1,500-year-old Anglo Saxon coins worth up to £10,000 in a field in Chelmsford

A treasure hunter has unearthed a haul of ancient gold coins, thought to have been buried with an Anglo-Saxon King nearly 1,500 years ago. Chris Kutler, 54, stumbled upon the coins after spending four days searching a 1,600 sq metre field in Chelmsford, Essex.

Gold Rally Cools, Not Its Bubble

After gold coin’s continued rally in the past month, which pushed….

The Apiary Fund Commemorative coin is a tribute to the traders who put in time, energy, and faith in their efforts to become funded traders. OREM, Utah November 24, 2017 In the spirit of those Amer…

A century ago, a penny was rare, coveted

One hundred years ago there was a shortage of pennies during WWI.